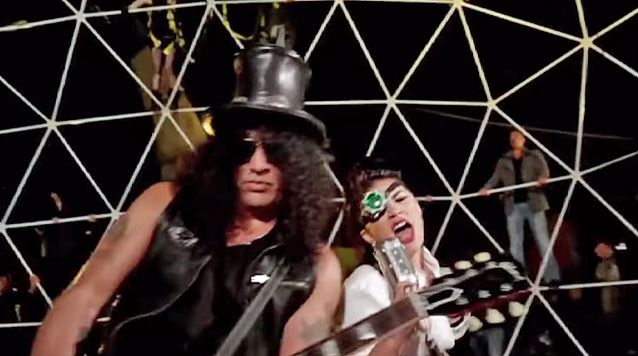 Former GUNS N' ROSES guitarist Slash makes an appearance in "Punch Drunk Lover", the new video from Los Angeles, California-based experimental rock/rap artist Miss Bang Bang. The clip, which will receive its premiere on July 15 on VEVO, was directed by Troy Duffy, the writer and director of "The Boondock Saints", the 1999 thriller about two Irish vigilantes. The video features Slash and Miss Bang Bang jamming inside a 44-foot geodesic dome with people crawing on it, 25-foot flame throwers, little people, adult-film legend Ron Jeremy and a slew of other "Boondock Saints" actors.

A "Punch Drunk Lover" video preview, which includes interviews with Slash, Troy Duffy and Miss Bang Bang, is available below.

As Germfree, her original rapper alter-ego, Miss Bang Bang was featured in six episodes of "The Cypher Effect", and gained popularity through the EDM world, as many of her songs were remixed by various artists.