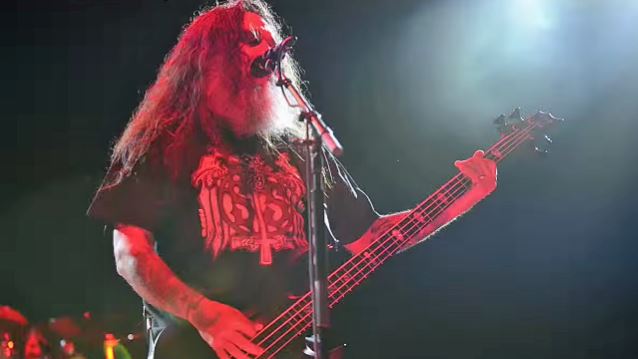 Kanon Madness has uploaded video footage of SLAYER performing the title track of its forthcoming album, "Repentless", on June 27 at San Manuel Amphitheater in Devore, California as part of this year's Rockstar Energy Drink Mayhem Festival. Check it out below.

SLAYER's eleventh studio album, "Repentless", will be released on September 11 via Nuclear Blast. The CD's title track is now on sale digitally virtually everywhere, including on Amazon, iTunes and Google.

"Repentless" will be made available in a wide array of formats, as detailed below:

The artwork was created by Brazilian artist Marcelo Vasco in collaboration with the band's Tom Araya and Kerry King.

The Metal Eagle will include the following exclusive items: