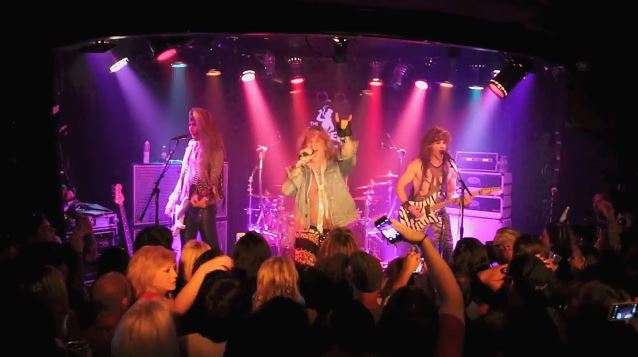 According to Joe Dolan of JoeDolanPR.com, STEEL PANTHER frontman Michael Starr told the crowd: "It's great to be back at The Viper Room after more than ten years. It still smells like B.O and wet pussy, just the way we remember it!"

Video footage of the entire concert — courtesy of JoeDolanPR.com — can be seen below.

Throughout the night, the band insisted that they were not performing as STEEL PANTHER due to their management's financial take of their earnings should they mention the name of the band. While the running joke popped up many times during the performance, fans were actually able to take home a new piece of memorabilia — a JAM PRANCER t-shirt that featured a double unicorn logo under a sparkly rainbow.

The band will return to California as STEEL PANTHER in November when they hit the road as the openers for JUDAS PRIEST.

STEEL PANTHER's third album, "All You Can Eat", sold around 13,000 copies in the United States in its first week of release to land at position No. 24 on The Billboard 200 chart. The CD arrived in stores on April 1 via Open E/KLS.