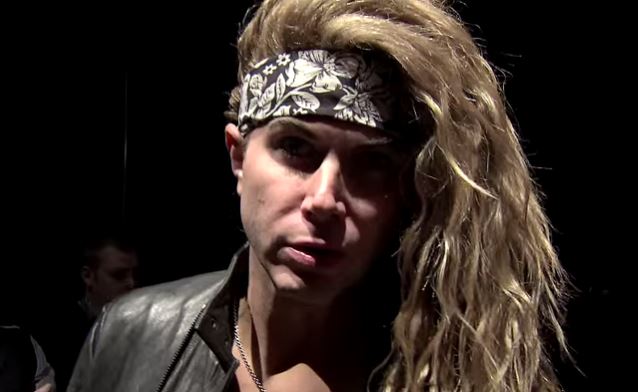 Bassist Lexxi Foxx of Los Angeles glam-metal jokesters STEEL PANTHER spoke to The Daily Times about the band's penchant for both paying tribute to and lampooning the heyday of '80s "hair metal."

"That's something we wanted to do — bring back heavy metal," Foxx said. "That era was so fun, because it's cool when you go to a concert and see guys that don't look like they work at a gas station. That was the era of real rock stars — guys in WARRANT and KISS and DANGER DANGER, guys that took pride in their appearance. Everyone knows that the more colors you wear, the more bitching you look, the more chicks you get and the more fun you are to watch. That's what the '80s were about, and it's just really cool we're bringing that back."

Foxx also talked about his onstage persona as the bass player whose androgynous looks and fashion sense are valued more than his ability to play.

"It's about how you look and not necessarily how you play," he said. "I make mistakes every night, but I don't care; I just want to look bitchin'. I leave it up to everyone else in my band to play good. That's really all we know, and that's the reason why we continue to do this — what to look for, what to wear, how high to wear your hair, the right amount of makeup to wear when you go out during the day, because you don't want to look like you're trying too hard. You want to try just enough to look impressive to attract [women], and I think we do that with the bracelets and bandanas and mascara and eyeliner and lip gloss."

STEEL PANTHER's third album, "All You Can Eat", sold around 13,000 copies in the United States in its first week of release to land at position No. 24 on The Billboard 200 chart. The CD arrived in stores on April 1, 2014 via Open E/KLS.