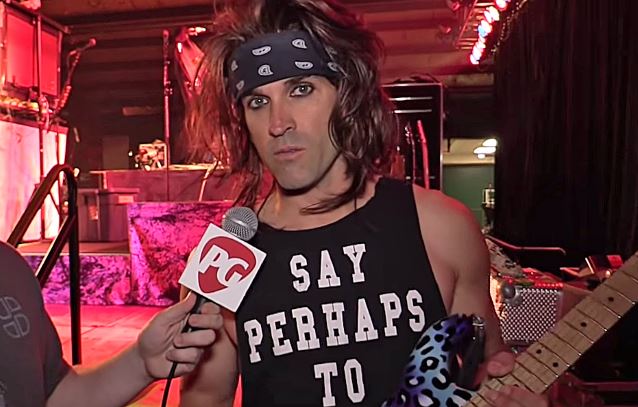 Premier Guitar caught up with Satchel, the guitarist for Los Angeles glam-metal jokesters STEEL PANTHER, during a stop at the Val Air Ballroom in Des Moines, Iowa. Check out the clip below.

Even though his rig is rather simple, Satchel took the time to discuss his signature Kramer, high-gain amps, and his time spent on safari in Africa.

When you shred like Satchel, the only logical choice is to play our own signature models. Other than the tunings and finishes, the collection of flamboyant guitars shown here are nearly identical. Each one features a maple body with an oiled maple neck, Floyd Rose tremolo, and Seymour Duncan pickups (SH-4 and SH-2n).

In a recent interview with Songfacts, Satchel stated about STEEL PANTHER's fourth album, last year's "All You Can Eat": "I think every time you write a record or a body of work or a bunch of songs, it's always going to be different than the bunch of songs that you wrote before. This is definitely our catchiest record so far. A ton of hooks. And, to me, as a songwriter, that's what I want. As a listener, I always am bummed out when I buy a record and there's only one or two songs that I like and that I want to listen to. To me, that all comes down to the hooks. Is it something that I find myself wanting to sing over and over or hear over and over? And this record I feel has more hooks that most of our previous records. Although I think those records are great, too."

He continued: "Once I was five or six songs into 'All You Can Eat', I started going, 'I need some other songs to balance out what I've written.' So if you've already written a few mid-tempo songs, then you maybe want to add some uptempo stuff or whatever. Just make it complete as a record so it doesn't get too boring in any one direction."