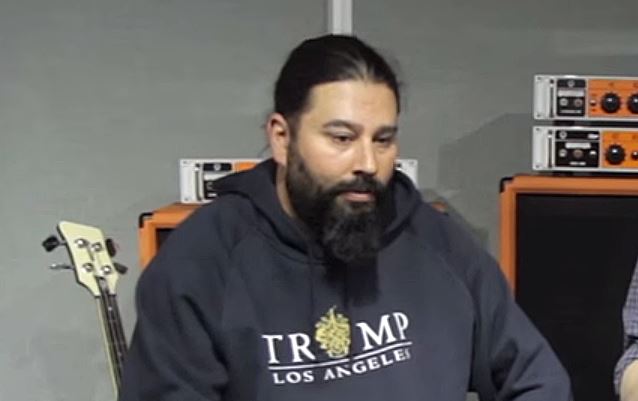 Music Radar conducted an interview with DEFTONES guitarist Stephen Carpenter at the Orange booth at this year's NAMM show in Anaheim, California. You can now watch the chat below.

Asked about his role during the songwriting process for DEFTONES' forthcoming studio album, Stephen said: "I spent a lot of my time on gear. As a participant in the songwriting, I was present and I did my stuff, but it's not mostly my influence as far as what we've got going on the new stuff. I mean, I've definitely got my touch on it, but it's not all about me. We're a band, and right now, on this record, Sergio [Vega, bass] and Chino [Moreno, vocals] have done a lot of the work on this record. I just had to be some glue and hold 'em together."

Carpenter told ESP Guitars at NAMM that DEFTONES' long-awaited follow-up to 2012's "Koi No Yokan" will arrive on April 8.

During a November 2015 interiew with BBC Radio 1's "Rock Show", Moreno stated about "vibe" of DEFTONES' next CD: "I can't really compare it to our last couple of records. I mean, those two records were done in a very similar manner where we locked ourselves in a room for a short period of time and wrote and recorded it. And therefore, I feel like we sort of really captured this moment in time, and the records sort of sound cohesive because of that. This record was done sort of over a year, spread out over these little, tiny writing sections. So it sounds a bit more fragmented, but in a good way. I mean, I feel like you put on one song and it's completely different from the song after it, or previous to it. So it's not like we had this one main idea and we went in and we sort of went with that vibe. I mean, the vibe's sort of all over the place. So, like any DEFTONES record, I mean, it's got dynamics and there's loud aggressiveness and there's mellowness to it, but it's all sort of got an ebb and flow to it. I don't know… It'd be hard for me to just put it in words exactly what it sounds like. It's definitely a DEFTONES record. The way I look at it is it's a gradual step from where we last were."

According to Moreno, sixteen songs were written for DEFTONES' new effort, which was once again produced by Matt Hyde (SLAYER, CHILDREN OF BODOM, MONSTER MAGNET, WINDS OF PLAGUE). The CD will feature a guest appearance by Jerry Cantrell (ALICE IN CHAINS).