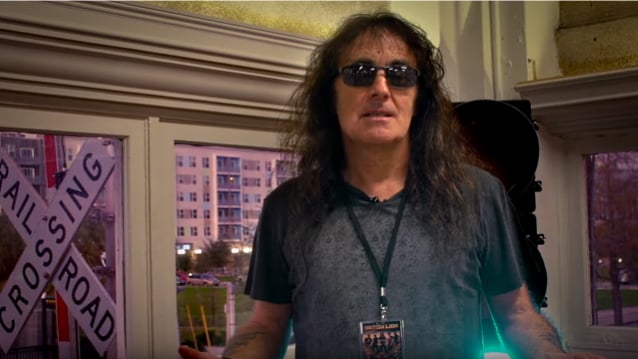 BRITISH LION kicked off its first U.S. tour on January 18 at Ace Café in Orlando, Florida. The trek will hit a number of cities, including San Antonio, Dallas, Memphis, Atlanta and Fort Lauderdale, before concluding on February 20 in New York.

Several behind-the-scenes clips from the first few days of the tour can be seen below.

BRITISH LION is the side project of Steve Harris, bassist and co-founder of metal icons IRON MAIDEN.

Recorded, engineered and mixed at Barnyard Studios by Tony Newton and produced by Steve Harris, "The Burning" is crammed with powerful hard rock melodies.

Asked by the Tampa Bay Times what the itch is that BRITISH LION scratches that he doesn't get in his job with MAIDEN, Harris said: "I suppose playing small clubs and being close and personal with the audience. I love playing big places as well. I enjoy them all, and I'm very lucky that I can do them all. But also, it's clubs that I never played with MAIDEN, even in Europe. There's a famous club called the Milky Way in Amsterdam, which I managed to play with BRITISH LION, but I never did that with MAIDEN. There's places now that I'm going to be playing on this tour that I've never played before. So it's all new ground. It's a challenge. It's nice. I like a challenge."

Regarding what his hopes are for what he can accomplish on this tour, Harris said: "There's not enough years left in me to try and do some long-term project, to try to make sure something can be successful. That's not what we're doing it for. We're just going out and having fun. It's a good live band. People should come and check it out, and have a good night out."