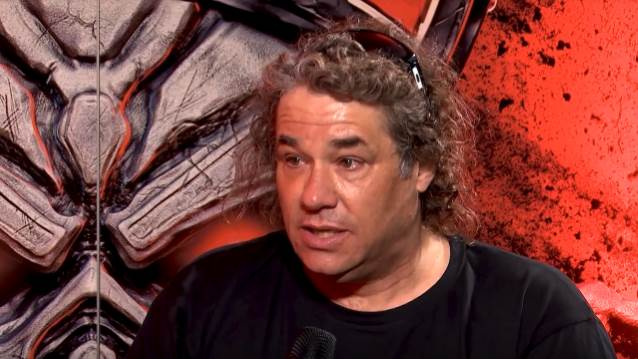 Steve "Zetro" Souza says he cannot picture EXODUS following in the retirement footsteps of their longtime thrash counterparts SLAYER. SLAYER, which announced its "final tour" earlier this year, currently features in its ranks EXODUS guitarist/primary songwriter Gary Holt as a replacement for deceased guitarist Jeff Hanneman. While both bands got their start in the Bay Area/Los Angeles thrash scenes around the same time, SLAYER has decided to cease regular touring activities after this run. Holt has previously stated he will return to full-time EXODUS duty once SLAYER's live obligations are complete.

Asked by Graspop Metal Meeting (see video below) whether he's thought of retiring now that SLAYER is hanging it up, Steve said: "No, no, no, no, no, no. I like doing this. I'm not tired of this yet. For some bands, if that's where your head's at, that's great and I understand that if you don't want to be here, don't come out, it's not something you want to do. For me, I still enjoy it. I still have a good time, I'm having a good time onstage. I'm very fortunate to be able to do this at the age I'm in. EXODUS, our first record ['Bonded By Blood'] came out in 1985. That's 33 years ago. To still have younger fans and the older fans still coming in droves to see us, we'll be doing it like we tell them every night: 'As long as you guys are coming we'll still be here.' We can't afford not to, right?"

Souza was also asked whether he's nostalgic considering the number of European metal festival appearances EXODUS has made over the years. "I think so," he said. "When I look back at those times — we were just talking about that the other day. Unfortunately, [PANTERA/HELLYEAH drummer] Vinnie Paul passed, we found that out. PANTERA, we gave them their first tour and they opened for EXODUS and SUICIDAL [TENDENCIES]. Gary Holt and I were talking — Gary's not with us right now, obviously — and we were talking today about how I just keep memories from that. So, I'm very nostalgic. I love the history, the history of Bay Area thrash and from the beginning when I can just remember the METALLICA house and just things. So, I'm very nostalgic when it comes to that type of stuff. Metal people are so receptive. We're like a family. If you love heavy metal, you love it forever. It's not like something you get into: 'I liked heavy metal when I was a kid.' You never hear anybody saying, 'I was listening to SLAYER for a summer.' If you're in, you're in. That's why I think longevity is the reason why we can do that is because the fans are so responsive and they're always supporting. That tent was packed today in there. Every time, singing the songs back and forth, pitting for 'The Toxic Waltz', 'wall of death' for 'Strike Of The Beast'. They know the drill, right? Great times."

Souza recently confirmed that fans will have to wait until at least the end of 2019 before the band's follow-up to 2014's "Blood In Blood Out" album. Although it was originally reported that the veteran San Francisco Bay Area thrashers would go into the studio last October to begin recording the new effort, it now appears that the band will not begin work on the next disc until Holt is done playing with SLAYER.

"Blood In Blood Out" was EXODUS's first album since the departure of the group's lead singer of nine years, Rob Dukes, and the return of Souza, who previously fronted EXODUS from 1986 to 1993 and from 2002 to 2004.