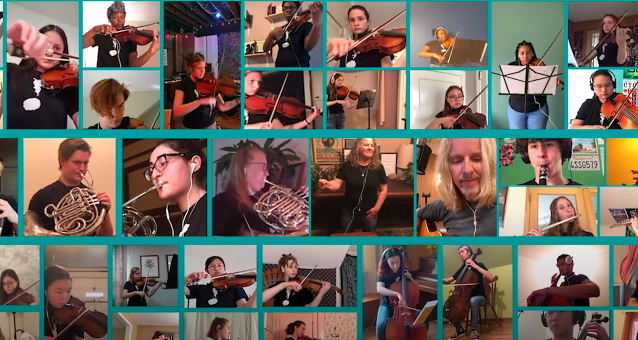 As a celebratory nod to the album's success, STYX singer/guitarist Tommy Shaw collaborated with 88 kids (ages 12-18) from the Contemporary Youth Orchestra in Cleveland, Ohio, who gathered together from their homes to record their parts for an extra special performance "Fooling Yourself" with Shaw at his home in Nashville, music director Liza Grossman in Cleveland Heights, Ohio. It was actually the first time the orchestra had performed together since the pandemic began.

The video, which is being presented by Bitchin' Sauce (a family-owned company based out of San Diego, California that manufactures almond-based dips) and was edited together by Adam Smalley of AJ Video Cleveland, can be seen on STYX's official YouTube page.

It all began with an invitation from Grossman to Shaw in an effort to bring the orchestra together after so much time apart.

Shaw explains: "Our friend Liza Grossman invited me to remotely perform STYX's 'Fooling Yourself', from our album 'The Grand Illusion', acoustically with the current members of Contemporary Youth Orchestra. Everyone, including me, sent in cell phone videos of themselves playing and singing our parts. Detroit producer, the immensely talented Michael Bradford heard about it and offered his services in post-producing this massive musical event. I have been blown away during this process as it developed into what you'll see and hear. Remember, aside from Liza and me, none of the orchestra members are older than 18 years of age. We proudly present it to you on the 43rd anniversary, 7/7/77, of the release the album on which it first appeared. And now, without further adieu... Contemporary Youth Orchestra!!!"

Grossman states: "'Fooling Yourself' is my one of my favorite STYX tunes to conduct — the waltz feel at the top, the changing meters and the positive messages embodied in the lyrics. I love that the first minute thirty is like an overture, then it changes groove and 30 seconds later, Tommy's distinctive and iconic vocals enter right in his sweet spot range. It's excellent for the band of course, but it's also a full orchestral piece of music that is brilliantly scored by Stefan Podell. The use of the strings is lush, the woodwinds are playful, the harp is engaging, the brass add a ton of color and the added percussion like shaker and mallets bring the feel of the orchestra to completion. Color, movement, style and brilliance! All things that embody Tommy, his music and the raw talent of my students.

"'Get Up! Get back on your feet — you're the one they can't beat and you know it. Come on! Let's see what you've got — just take your best shot and don't blow it.'

"Incredible words of inspiration during this time in our world. Perfect for young musicians to play and portray as a message of hope and positivity to the masses."

Bitchin' Sauce founder and vice president L.A. Edwards says: "Bitchin' Sauce is excited to be associated with iconic rocker Tommy Shaw and STYX's classic song 'Fooling Yourself'. STYX's impact on music is an inspiration for my band, L.A. EDWARDS, and we're stoked to have Bitchin' Sauce be a part of this amazing video premiere."

It's not the first time Shaw performed with the Contemporary Youth Orchestra, which is the first and only youth orchestra in the country dedicated to the study and performance of contemporary orchestral literature. STYX first played with the Contemporary Youth Orchestra in 2006 for a show dubbed "One With Everything", which was released via Eagle Rock Entertainment on multiple formats later that year. The band performed a set of 16 songs, including three songs from their new album at the time, 2005's "Big Bang Theory".

In 2016, Shaw performed a one-night-only solo performance with the Contemporary Youth Orchestra titled "Sing For The Day!" on at Cleveland State University's Waetjen Auditorium. That performance first aired on AXS TV on July 9, 2017, and was later released on Blu-ray, CD, and digital formats on June 29, 2018 via Eagle Rock Entertainment. It debuted on four of Billboard's charts, including No. 5 on the "Classical Albums" chart, No. 5 on the "Classical Crossover Albums" chart, No. 6 on the "Top DVD Music Videos" chart, No. 8 on the "Music Video Sales" chart, and No. 49 on the "Rock Albums" chart. It also jumped to No. 2 in its second week on the "Top DVD Music Videos" chart.