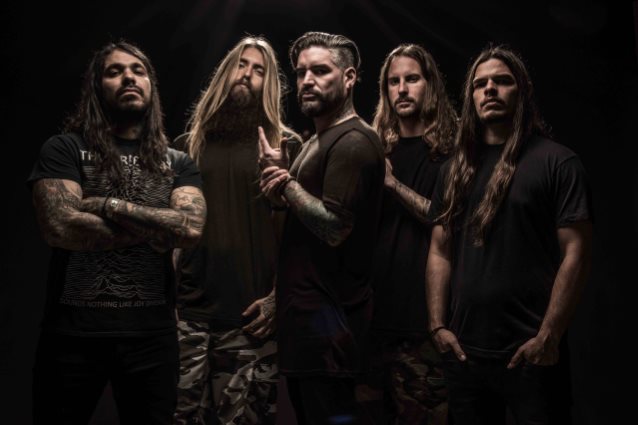 Alex Haber of Heavy New York conducted an interview with guitarist Chris Garza of California deathcore outfit SUICIDE SILENCE prior to the band's August 1 concert at Irving Plaza in New York, New York. You can watch the entire chat below. A few excerpts follow (transcribed by BLABBERMOUTH.NET).

On whether SUICIDE SILENCE planned beforehand to incorporate clean vocals on its controversial 2017 self-titled album:

Chris: "Absolutely. I mean, every record we kind of like, we want to not evolve, but take risks and chances. After 'The Black Crown', we were going to take some fucking…basically, what we did on the record, after 'The Black Crown', but after what happened with [deceased vocalist] Mitch [Lucker], that put things to a halt. Things were already going to happen, but with 'You Can't Stop Me', there's no room to do anything. We barely were able to just be a band again, so to go on with Eddie [Hermida] and without Mitch and go in general and experiment, it was impossible. Let's see if we can be a band first. Once we accomplished that, it was like, 'Okay. Now let's see what we can really do.' Basically, it was like, 'What if we die? What would be our last record? What would we do? What do we want to try?' It's about learning. Bands are afraid to fucking fail because that's how you learn. But, I'm very thankful and blessed to be in a real band. We're all in this and we love music and we love our fans and we want to give them something fresh. We know they're in it for the long haul, as we are. It takes, as throughout my career and demos and all that stuff, I learned that in order to get a certain sound for a record, sometimes it takes a couple of records to get to the record that you're trying to do. I had that in mind. I don't care, I didn't care about record sales or all that bullshit that everyone is like obsessing about. It's, like, 'What's this going to do for us in five years from now? Ten years from now? Thirty years from now?' What's our eighth record going to sound like if we try this on our fifth?'"

On whether their self-titled album has opened up even more doors from them to experiment:

Chris: "First and foremost, we were in a room with [producer] Ross Robinson. I mean, just that alone is a mindfuck. [Laughs] It's still hard being around him because I truly with my heart and my soul, I love him because he's done so much for me. Again, we had the preconceived idea that we were going to try everything and Ross was going to help us explore everything. But the thing about that is, we experimented with everything possible with every song, every part, every drum part. The logo, the video, the way we toured, we experimented so much, it was humanly impossible to focus on anything. To get a sound, like a heavy tone, it was impossible because we were experimenting so much, but, we were willing and not afraid to do that."

On whether SUICIDE SILENCE can now tour with different bands because of their "new" sound:

On the band celebrating the tenth anniversary of its 2007 "The Cleansing" debut with a tour last year:

Chris: "At first, when the time of year comes, bands start talking about it. At first, I didn't want to do it because I didn't want to do a cashgrab. We talked about it, but I didn't want to do it then. But, we're a real band, so when we practice, we're in a room and we jam. In one of our jams, Alex [Lopez, drums] was playing one of our old songs like 'Fallen'. I was like, 'Oh shit.' Then he played 'The Price Of Beauty' and the fucking hits and I was like, 'Damn, I would love to play this!' If the feeling is right and the idea started, so we decided to do it. It was fun. It was just pure fun."

On whether there's a different vibe to the band's older material with Hermida singing in place of Lucker:

On his approach to songwriting:

Chris: "It's a separate thing. I'm not bagging on anything else outside of songwriting because everyone can pick your own style that speaks to you. I back that. But, people put songwriting and guitar playing, technical playing in the same box. I'm, like, 'No, dude. That's a completely different thing.' I'm the worst guitar player on every tour that we do. I suck. I suck and I'm proud to say it. I never claimed to be a good player. But, I'm the best at what I do and no one can fuck with me. Nobody. I know what I do to do what I do. It's more of like, I think about playing more than I actually do it. It's so hard. It's hard because you have to keep yourself at like, as far as my style, you got to keep yourself at like a minimalist level. I notice if I practice too much on my theory, I lose emotion. I'm, like, 'Whoa, it blows my mind every time.' It's like this weird balance that I struggle with because it's hard. I have to stay away from theory completely because then I can't get the emotion out. I have to stay at the suck level because that's where the riffs come from. That's where that stupid riff where I'm just jamming and boom! It hits. That won't come if I was really good."

"Suicide Silence" was released in February 2007 via Nuclear Blast Entertainment. The CD was produced by Robinson, who has previously worked with KORN, SLIPKNOT, LIMP BIZKIT and SEPULTURA, among others, and was mixed by Joe Barresi (KYUSS, MELVINS, TOOL, QUEENS OF THE STONE AGE).

The controversy over the album's new sound — featuring a more melodic and clean singing style, in the vein of acts like DEFTONES and KORN — even caused one disgruntled fan to launch a petition to stop the record coming out.