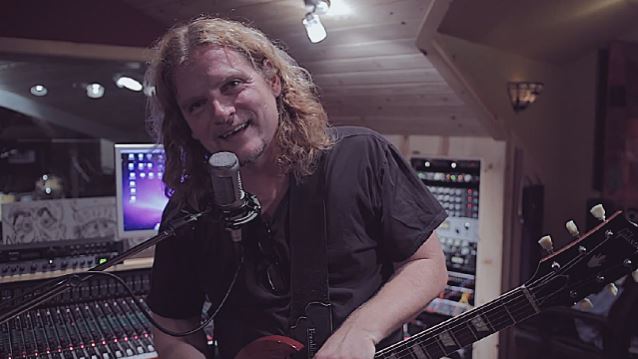 In the three-minute clip below, TESLA guitarist Frank Hannon shows you how to play the band's song "MP3" from the band's new studio album, "Simplicity".

"Simplicity" sold around 14,000 copies in the United States in its first week of release to land at position No. 24 on The Billboard 200 chart. The record arrived in stores on June 10 via Tesla Electric Company Recording's arrangement with Entertainment One Music and distribution.

In a recent interview with Ultimate Classic Rock, Hannon stated about how he deals with the constant technological changes over the last few years: "A lot of people talk about the negative parts of the business and technology changing it, but, really, I think it's been a blessing. It's made us so much more independent; we're do-it-yourselfers now. Everything is at your fingertips. In reality, you can make your own albums; you can promote yourself. You can do everything yourself now — which is why the big corporations, as far as record companies, have gone by the wayside. It's great for the artistic side of things. You can do your own graphics, design your own web sites, design your own album covers. You can email somebody a song instantly, which, in our case, came out good because when we were in the studio making this album, we were recording a song and literally within 30 minutes sending it to [producer] Michael Wagener to mix it — and then he would send it back to us and we would get it an hour later. That whole process used to take weeks with FedEx and sending tapes across the country, so I think it's great. The only thing is being able to hold an album in your hand, and being able to physically look at something and get into more than just one song.

"An album is a collection of songs, especially if you make a themed album. That's a whole other art form that kind of went by the wayside because of the convenience of downloading music.

"There are still some great bands that are awesome. MUSE is one of my favorite bands; they make albums from start to finish that are just beautiful."

Speaking to NI Rocks, TESLA singer Jeff Keith stated about the band's approach while writing and recording "Simplicity": "We wanted to keep it simple. With so much of today's technology, Pro Tools and all that stuff, it's very easy to overdo it and oversaturate the record, because there is an endless amount of tracks you can do and there are so many ways you can cheat and stuff. We like to make records that we can keep simple and reproduce live you know." He continued: "'Simplicity', we thought, was a great name for the record because we wanted to keep it simple and we're a simple blue-collar rock 'n' roll band. We always like to make records, like I said, that we can play live."