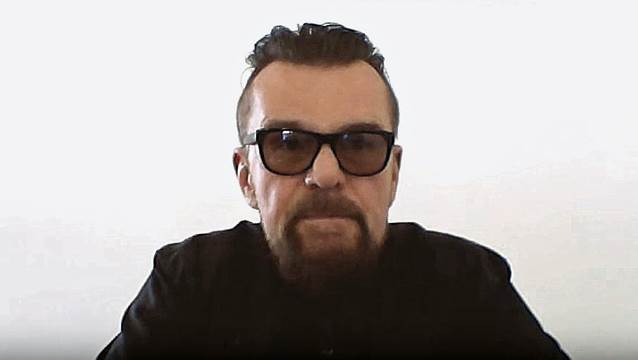 THE CULT guitarist Billy Duffy was recently interviewed by Ramblin' Man Fair. The full conversation can be viewed below. A few excerpts follow (as transcribed by BLABBERMOUTH.NET).

On being influenced by MOTT THE HOOPLE:

Billy: "I grew up listening to MOTT THE HOOPLE. I read Ian Hunter's book, 'Diary Of A Rock And Roll Star', when I was a teenage boy. I just read it and went, 'Oh, I could do that — tour America, meet people like David Bowie and Iggy Pop, have fun and get paid for it. But I didn't want to be Ian Hunter — I never wanted to be a singer or a frontman. I never wanted to be the center of attention, ever. I would rather just be slightly to the right or left, depending on your perspective. So MOTT THE HOOPLE has always been very special to me, also in their imperfection. I think it would be fair to say that they were always a bit of a flawed band who nearly broke up. Their story's kind of tragic and heroic and amazing at the same time, where Bowie gave them 'All The Young Dudes'. They just appeal to me. There's something about their imperfection, but it was so real, and when they locked together and it was good, it was like the best thing in the world."

Billy: "The thing with THE CULT is we understand that a degree of our appeal to the audience is nostalgia. I like to describe it as 'nostalgia with a lowercase n.' It's not a bad thing — we don't wallow in it; we're happy and honored to play the old songs. There'd be a lynching if we didn't play 'She Sells Sanctuary'. We're fortunate that we're happy to do so; however, it's nice, I think, for the fans — particularly the real hardcore fans — I think they enjoy some of the new stuff, so we sprinkle a few new songs in there to mix it up, just to illustrate, you know, 'Hey, we wrote some great songs in the 1980s, and these ones aren't too bad that we wrote two years ago, either.'"

Billy: "He's like family to me. We have a relationship that's much more familial than anything else. I can't even quantify it. We just have an understanding. There's kind of, like, telepathy. When you start, you put everything you've got into creating this thing, and we were one of the very fortunate bands who actually made it, and are even more fortunate to still be making new music, touring and playing, and even more fortunate that we're not really that overweight and we still have our own hair. The dynamic with me and Ian really hasn't changed. We got together in 1983 because we had an idea that the two of us would make a good team, and throughout all the ups and downs and all the things that have happened, the classic combination of lead singer and guitar player, that formula works. It's true today as it was 40 years ago. I think it's good that your singer's a little dangerous. I think it's important. Ian's a loose cannon, and that's what makes it good. I like that fact. I think he's edgy. He's one of a dying breed."

On the band's identity:

Billy: "One of the things about THE CULT that I think some people find appealing is that whatever blunders we might have made in our career — aesthetically, musically, whatever decisions — we've clearly got more right than we've got wrong. We've all made mistakes, but they're genuine mistakes, and we're just kind of guys who were searching and seeking and still trying to make rock music relevant. Probably the difference between THE CULT and a lot of other bands who are these days saying, 'We're rock,' they tend to in my opinion wallow in the era of long hair and flairs. In THE CULT, we have a lot of that kind of punk rock DNA. Everybody knows we could just play the old songs, and people would be really happy — everybody apart from THE CULT."

On his ability as a guitarist:

Billy: "I'm quite a lazy guitar player. I always was. You get what you get. Part of me used to feel that if I didn't overdo the playing, I might possibly get more interesting ideas as I stumble around the fretboard creatively. As I've gotten to be older — the last, say, ten years — I've been a lot more open to jamming with other musicians, and I've been fortunate enough to play with a lot of my peers and a few legends. That's given me a new lease of life, because it opened me up to many other ways of doing stuff. I just used to think that punk rock thing – if you knew too much, it would taint what you're doing. The way I write, I just kind of hear something in my head, and I work it out on the guitar. It just comes out. I'm not a studious guy; I don't write anything down. I just wait for it to appear."

On the advice he'd give a young guitarist trying to write a solo:

Billy: "My advice has always been, try and complement the song. Ultimately, you're all there to serve the song. That song might be best served by playing the guitar riff really loud and having very few vocals, or the song might be best served by having very little guitar and a lot of piano. It's trying to find the essence of the song. I just happened to have grown up in the '70s, where the guitar signatures were hooks. Make a guitar solo that you can whistle. Try and help the song. Understand that most people can sing or talk, [but] not everybody can play an instrument, so don't be indulgent."

On whether he had any difficulties adjusting to fame:

Billy: "I think everybody goes through it. Your ego gets a little out of check. It's difficult, because you're a bit like a performing seal. People want you to be, basically, like a little pirate ship going around the world doing your business and trying to have as much plunder as you can, and then people want that to kind of be put in a box – kind of, open the box, out you get, be naughty, get back in the box, behave yourself. I think those lines get a little blurred, particularly when money gets involved. When individual band guys get enough money that perhaps they don't need each other – because at the beginning, you need each other; you're sleeping in the same bed, four of you in a room — you can go a couple of ways with it, particularly if you've never had any."

On when to expect new music from the band:

Billy: "We're always kind of at it. We haven't actually been near a studio yet, but we're in the kind of creating phase. There was talk of doing some new music — maybe not an album. We don't really overdo it. I think with THE CULT, one of the things me and Ian agree on is when we feel we've got good enough songs, it's quality, not quantity. There's no real advantage to just churning out an album unless you feel that it's very strong, like we did with 'Hidden City'. We felt that album was pretty much as good as it could be given the circumstances. New music is definitely part of THE CULT's future. I don't think that will ever go away."

THE CULT will join forces with STONE TEMPLE PILOTS and BUSH for the first time this summer for the "tri-headlining" "Revolution 3 Tour". The North American amphitheater trek begins on July 18 in Nashville and will hit an additional 19 cities over six weeks before concluding in Phoenix, Arizona on September 2. Each group will perform a full set in a different order each night.