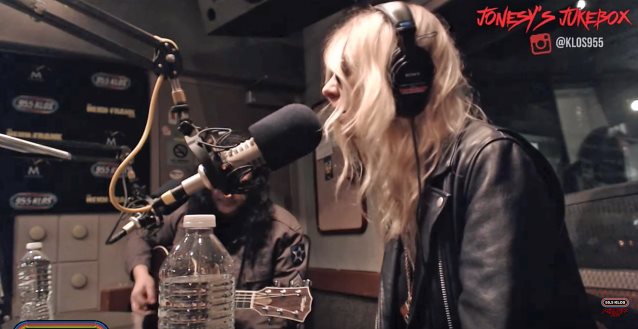 THE PRETTY RECKLESS took part in an interview and acoustic performance on the December 5 edition of SEX PISTOLS guitarist Steve Jones's radio show, "Jonesy's Jukebox". You can now watch video footage of their appearance below.

THE PRETTY RECKLESS recently broke a record set by 3 DOORS DOWN and has seen its first four mainstream singles hit No. 1 on Billboard's rock chart. The band's new song, "Take Me Down", topped the chart, following in the footsteps of "Heaven Knows", "Messed Up World" and "Follow Me Down" from 2014's "Going To Hell" album. That broke the group's tie with 3 DOORS DOWN and put them in a position to tie or break the next record, five No. 1 singles, which is owned for now by Canada's THREE DAYS GRACE.

THE PRETTY RECKLESS also now have the most No. 1 singles by a female-fronted rock act.

"Take Me Down" is from the band's third studio set, "Who You Selling For", which arrived on October 21.

THE PRETTY RECKLESS singer Taylor Momsen told The Daily Utah Chronicle about the band's songwriting process: "There is no process to writing, which is what makes it so torturous. The only constant thing when you go to write a record is to try to keep your mind as open as possible; you never know where inspiration will come from. You just have to wait for something to just spark and hopefully that will lead to a good song."

She added: "The more experiences you have, the more you have to say, the more you can write about. I think it's just kind of a natural progression; a natural evolution. We all really push each other to be better constantly. I think that is necessary and helps a lot."