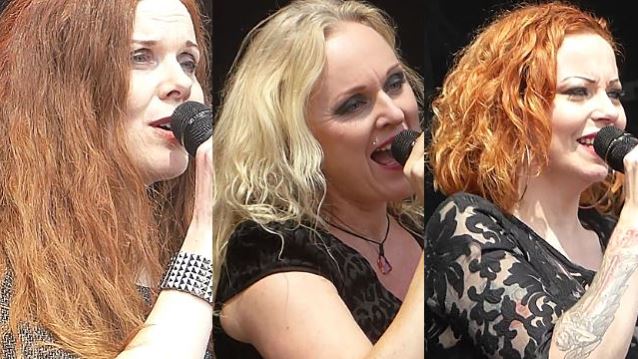 Fan-filmed video footage of THE SIRENS, the collaboration between vocalists Kari Rueslåtten (THE 3RD AND THE MORTAL), Anneke van Giersbergen (THE GATHERING) and Liv Kristine Espenaes Krull (LEAVES' EYES, THEATRE OF TRAGEDY), performing on June 6 at the Sweden Rock Festival in Sölvesborg can be seen below.

The seeds for THE SIRENS were planted when Anneke approached Kari in early 2013 with the proposal of doing a duet for her "Drive" album (released in 2013). Seeing as Anneke regards Kari as an inspiration going in to do THE GATHERING's breakthrough album, "Mandylion", Anneke's intention was to pay tribute to Kari via the collaboration. The song didn't make the final cut as it didn't fit the album, but they remained in touch. Then, in July 2013, Anneke and Liv had a chance meeting at the Masters Of Rock festival in the Czech Republic, and THE SIRENS concept was born.

"We had a few minutes only to talk in between our gigs," Liv recalls, "but we agreed that we really should get together and tour. We both had to smile then, thinking that we were, with Kari, the 'originals' within our scene. Moreover, all three of us being mothers and still highly busy in music and art. Anneke told me that she had just talked to Kari, and that was the 'go' for THE SIRENS."

It would be fair to call Kari the catalyst for THE SIRENS, as both Anneke and Liv saw her as a role model when they first made their way into music.

"I find it hard to believe that I once inspired them," Kari admits, "but if so, it is truly flattering. It is a fantastic feeling to know that I [am] singing live with two such amazing vocalists!"

THE SIRENS' 2014 tour was split into two parts, including festival appearances, and staged at the end of last year in October and December. It was a full concert showcasing the trio, one band, and a setlist featuring songs from THE 3RD AND THE MORTAL, THE GATHERING and THEATRE OF TRAGEDY as well as tracks from Kari, Anneke and Liv's respective solo careers. They sang alone, performed duets, capping off the night with all three of them on stage, with a show that clocked in at around 100 minutes each night.

"The female-fronted scene has become so big all over the world, sometimes it's hard to believe the three of us were at the very beginning of it," says Anneke. "I am very proud of that. Without intentionally wanting to start a new genre, our bands made it okay to sound and look as a girl singer on a metal stage. It was all very new and exciting. I think the tour [was] great to, in a way, celebrate those early days now that a third-wave of bands is appearing on the scene."

There are noteworthy parallels in the lives of Kari, Anneke and Liv that bind them together. All three fronted influential bands, they went on to have lucrative solo careers and remain active, and they've successfully balanced music with family life. It's clear the trio share a chemistry that make THE SIRENS a rousing success.

"Making music with kindred spirits is such a wonderful feeling," Anneke says. "I also love harmonizing with more than one singer on stage, so that [is] a cool aspect of the show as well." 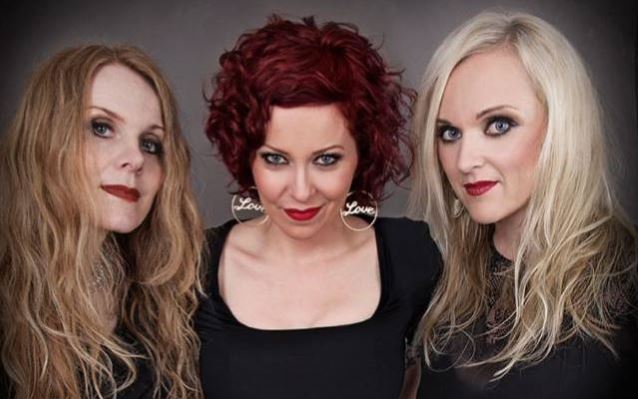