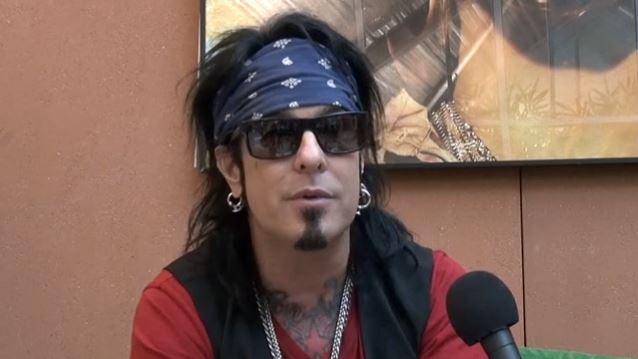 Even though MÖTLEY CRÜE called it quits as a touring entity last December after 35 years on the road, the band's bassist, Nikki Sixx, assures fans that there is plenty more material to come from the iconic Los Angeles hard rock outfit. "We have a live DVD of our last performance ever that we've just finished mixing," Sixx told Canadian rock journalist Mitch Lafon (hear audio below). "It looks fantastic. It was a great show. [And] we're gonna put [it] out.

"We have a legacy that needs to be curated," he continued. "We have all kinds of stuff, even from vintage merchandise and stuff. So we plan on, obviously, staying engaged with our fans. It's not like we're just gonna disappear. As a touring band, we decided that that's no more. The MÖTLEY CRÜE movie will come out. We're still working on a few of the bugs there, but that's gonna work out. So there's going to be a MÖTLEY in your life for a long time in one way or another."

According to Billboard.com, MÖTLEY CRÜE's three final shows at the Staples Center in Los Angeles, California (on December 28, December 30 and December 31) were seen by 37,000 fans, generating $2.7 million in box office revenue and placing the trek at No. 2 on the weekly "Hot Tours" list of top-grossing tours.

To celebrate their mark in rock music's history and in honor of their devoted fans, the band has confirmed the release of a full-length concert film of the final performance, which will also include exclusive interviews and behind-the-scenes footage of the last week of the tour, to be released later in the year. Produced and distributed by Live Alliance, the concert portion of the film was directed by Christian Lamb, while Jeff Tremaine, creator of the "Jackass" series, directed the documentary segment. The film will premiere in theaters worldwide, one night only, followed by pay-per-view in all cable/satellite/digital formats, with a DVD set to be released later on.

In addition to the live-concert film, MÖTLEY CRÜE is planning to release a major box-set of music down the line, as well as "The Dirt" feature film based on the band's best-selling 2001 autobiography, also to be directed by Tremaine, in the near future.

MÖTLEY CRÜE first announced plans for their two-year "Final Tour" by signing a Cessation Of Touring Agreement at a press conference in Los Angeles in January 2014, solidifying the end of their touring career.