In June 2010, Cormac O'Síocháin conducted an interview with former HELLHAMMER/CELTIC FROST singer and guitarist Tom Gabriel Warrior in Tokyo, Japan about black metal and the legacy of HELLHAMMER, the breakup of CELTIC FROST and Tom's new band, TRIPTYKON. Watch the chat in two parts below.

TRIPTYKON will tour North America with 1349 and YAKUZA in October.

"Eparistera Daimones" sold around 1,300 copies in the United States in its first week of release. The CD landed at position No. 27 on the Top New Artist Albums (Heatseekers) chart, which lists the best-selling albums by new and developing artists, defined as those who have never appeared in the Top 100 of The Billboard 200.

"Eparistera Daimones" was released as a deluxe mediabook CD edition (including a 28-page booklet and extensive liner notes) as well as a gatefold double LP via Century Media Records under exclusive license from Prowling Death Records Ltd..

In an exceptionally rare gesture, H.R. Giger has granted TRIPTYKON the use of his dramatic painting "Vlad Tepes" (work no. 412, 200 x 140 cm, acrylic on paper on wood, 1978). It is the artist's first authorized appearance on an album cover in 17 years, and the second time he collaborates with Warrior (following CELTIC FROST's "To Mega Therion" album in 1985).

Vincent Castiglia contributes "Triptykon", a specially created portrait of the members of the group, painted in the artist's own blood (86 x 86 cm, blood/iron oxide on archival paper, 2009). As Castiglia aptly put it, the amalgamation of works by H.R. Giger, Vincent Castiglia, and TRIPTYKON on "Eparistera Daimones" forms a creative triptych in itself. 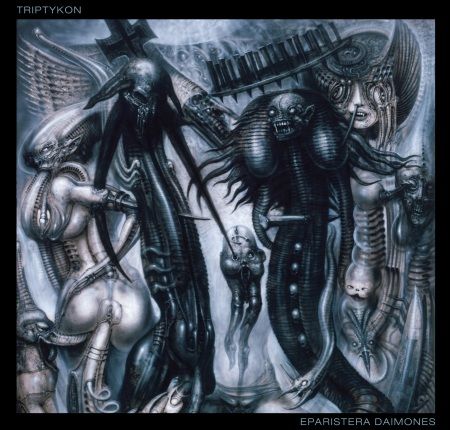