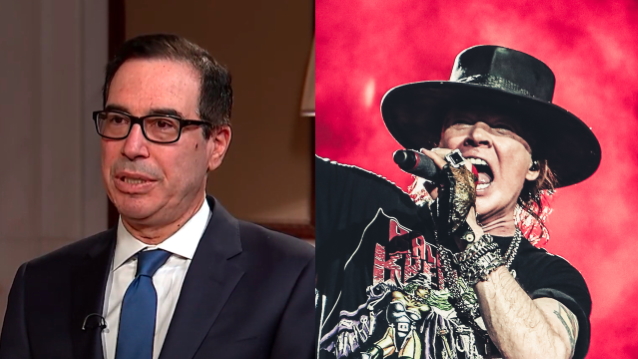 U.S. Treasury Secretary Steven Mnuchin has fired back at Axl Rose after the GUNS N' ROSES singer called him "an asshole."

On Wednesday (May 6), Rose took to his Twitter to write: "It's official! Whatever anyone may have previously thought of Steve Mnuchin he's officially an asshole," A couple of hours later, Mnuchin responded, writing, "What have you done for the country lately?", initially ending his reply with the Liberian flag emoji instead of the American one. Mnuchin quickly realized his mistake and deleted his original tweet before re-sending it with an American flag emoji.

Reacting to Mnuchin's faux pas, Axl tweeted back: "My bad I didn't get we're hoping 2 emulate Liberia's economic model but on the real unlike this admin I'm not responsible for 70k+ deaths n' unlike u I don't hold a fed gov position of responsibility 2 the American people n' go on TV tellin them 2 travel the US during a pandemic."

It's unclear what prompted Axl's initial outburst, but Mnuchin made headlines earlier this week after he faced a lawsuit over the Trump administration's decision to exclude some children from federal stimulus checks because one or both of their parents are immigrants. The lawsuit claims that by excluding these children a stimulus payment is "discriminatory" and unconstitutional. The payments are designed to help families weather the economic impact of the coronavirus, which has left about 1 in 6 U.S. workers without a job.

This is the second time in less than a week that Rose has used his Twitter to react to hot-button political issues. Over the weekend, he criticized California residents who protested against Governor Gavin Newsom's order closing Orange County beaches to help slow the spread of the coronavirus.

Rose has been extremely vocal in his distaste for the current U.S. president, having taken to Twitter a number of times in the past few years to slam Trump, his administration and his policies.

Back in November 2016, Rose condemned then-President-elect Donald Trump's choice for U.S. attorney general, and berated Trump for demanding an apology from the cast of the Broadway show "Hamilton" after then-Vice President-elect Mike Pence was booed when he attended the musical. One month later, Rose invited fans at a GUNS N' ROSES concert in Mexico City to beat the crap out of a large piñata designed to look like Trump.

In January 2018, Axl blasted the Trump administration as the "gold standard of what can be considered disgraceful." Nine months later, he urged his fans to go with Democrats in the midterm elections that year.

In November 2018, when Trump blamed the "costly" California wildfires on "gross mismanagement of the forests," adding "Remedy now, or no more Fed payments!", Rose responded, writing: "Um...actually...it's a lack of federal funding that's at the 'root' of the purported forest mismanagement. Only a demented n' truly pathetic individual would twist that around n' use a tragedy to once again misrepresent facts for attempted public/political gain at other's expense"

It’s official! Whatever anyone may have previously thought of Steve Mnuchin he’s officially an asshole.

My bad I didn’t get we’re hoping 2 emulate Liberia’s economic model but on the real unlike this admin I’m not responsible for 70k+ deaths n’ unlike u I don’t hold a fed gov position of responsibility 2 the American people n’ go on TV tellin them 2 travel the US during a pandemic.