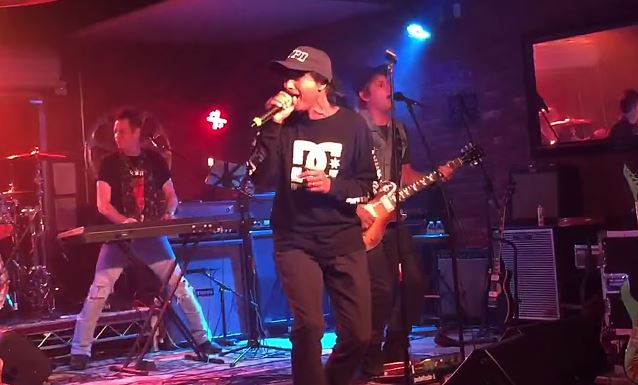 ANTHRAX frontman Joey Belladonna sang several rock classics this past Wednesday night (June 24) at Lucky Strike in Hollywood, California, including JOURNEY's "Separate Ways", LED ZEPPELIN's "Ramble On", FOREIGNER's "Feels Like The First Time" and BLACK SABBATH's "Heaven And Hell". Belladonna was accompanied during the "Separate Ways" performance — which was part of the weekly "Ultimate Jam Night" at the venue — by QUIET RIOT bassist Chuck Wright and Brazilian-American guitarist Rafael Moreira. Video footage of the event can be seen below. More clips and photos can be found at California Rock News.

When he is not busy touring and recording with ANTHRAX, Belladonna plays drums and sings for a classic-rock covers band called CHIEF BIG WAY. The upstate New York-based group, which also features Dave Mickelson on bass, Joe Precourt on guitar and John Goodwin on keyboards, plays versions of songs from JOURNEY, AC/DC, ZZ TOP, BOSTON, CHEAP TRICK, FOREIGNER, PINK FLOYD, VAN HALEN, COLLECTIVE SOUL, THE WHO, THE DOORS, SHINEDOWN and BON JOVI, among others.

In a 2005 interview with MusicDish, Belladonna was asked about the rumor that he came to the table with a JOURNEY tune during his 1985 audition for ANTHRAX. "Actually, what happened was I went into the room and they said, 'Just go on in,' and they hadn't heard me sing," he said. "They'd heard of me and they asked me to come in, but we were going in to start tracking and stuff, to get the mic set up and all that and they said, 'Let's get you in there and get you warmed up.' I hit the mic and belted out some JOURNEY… I think it was [the song] 'Lights'. I didn't know what the hell I was getting into in the first place. I just wanted to lay some vocals or something. Just to kinda give an idea and that's what happened. It wasn't really anything more than that. I just kinda belched it out. I think I did 'Oh Sherrie' [written by JOURNEY singer Steve Perry], too, or something. I dunno why, but I just did. It was something off the top of my head I could do a cappella and it was kinda challenging. I thought maybe in range or something that would be kind of intriguing. It was definitely one they weren't expecting."