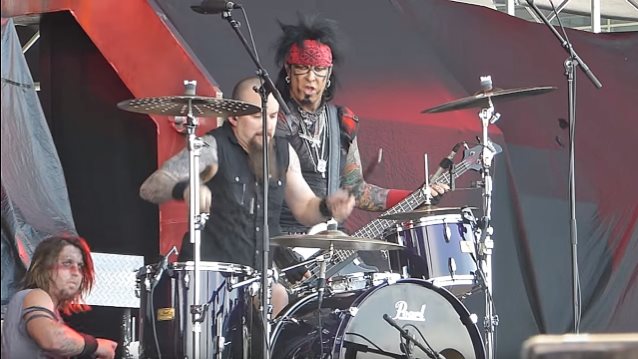 Drummer Mike Wengren of DISTURBED joined SIXX:A.M. on stage on May 29 at the River City Rockfest in San Antonio, Texas to perform the SIXX:A.M. song "Life Is Beautiful". Fan-filmed video footage can be seen below (courtesy of Chris Ramon).

The first volume of "Prayers For The Damned", the new double album from SIXX:A.M., was released on April 29 via Eleven Seven Music. The fourth studio album from the trio represents the band's most ambitious, complete and adrenaline-soaked effort to date. The album also boasts first-class production and mixing by singer James Michael and original artwork from DJ Ashba, proving that this collection of music is a true labor of passion.

DISTURBED's "comeback" album "Immortalized", was released last August and debuted at the top of The Billboard 200 chart. That made it DISTURBED's fifth effort in a row to enter the chart at No. 1, a feat shared only with METALLICA and DAVE MATTHEWS BAND.