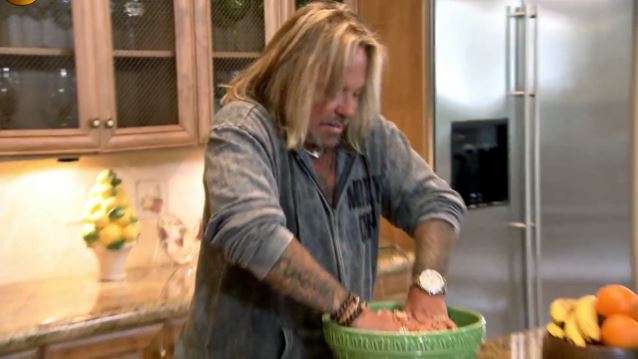 MÖTLEY CRÜE frontman Vince Neil and musician Gunnar Nelson are featured on this week's episode of "Celebrity Wife Swap", which premiered last night (Wednesday, June 24) on the ABC television network. You can now watch the show at ABC.go.com.

Neil has been the lead singer and frontman of the multi-award-winning rock band MÖTLEY CRÜE for 35 years. Vince resides in Las Vegas, Nevada with his girlfriend, Rain, and their pampered dog, California. Vince and Rain have been together four years; and, despite their 20-year age difference, the couple enjoys living it up in Las Vegas, celebrating the rock-star lifestyle with fast cars, trips to The Strip and parties that last late into the evening and early morning.

Gunnar Nelson is half of the '90s rock band NELSON, which he formed with his twin brother, Matthew. Descending from a family of Hollywood royalty, Gunnar is the grandson of the legendary Ozzie and Harriett Nelson, and son of the Grammy Award-winning singer Ricky Nelson. Today, Gunnar lives a quiet, family-focused life in Nashville, Tennessee with his wife, Lila, and step-daughters, Kaitlyn (14), Ariana (10) and Aja (8). With his days of partying, women and touring behind him, Gunnar is now a hands-on dad who contributes to all of the household and child care needs.

When it's time for the swap, Rain finds herself a bit out of place in Tennessee, and Lila is definitely a fish out of water in Las Vegas amidst Vince's fleet of flashy cars and expansive home. When the women meet their new families, Rain swaps her stilettos for a sweatshirt and heads to the home of Bradley Whitford (AEROSMITH) for a backyard BBQ where she feels that Gunnar's life is too slow paced and encourages him to embrace his inner-rock star and remember what it was like to be adored by millions of fans. Meanwhile, back in Las Vegas, Lila is whisked away for a night on The Las Vegas Strip with Vince and his friends — including his daughter, Elle, and Vegas "man about town" Robin Leach — for dinner where Lila sees Vince loving his rock star lifestyle. With shots flowing and the dice rolling, Vince gives Lila a taste of his life in Sin City.

When it's time for the women to mix things up and implement their own rules, both Vince and Gunnar receive surprises that will last a lifetime.

"Celebrity Wife Swap" features two women of celebrity families trading households, lifestyles and children (but not bedrooms) for one week. During that time, the women - and swapped families - learn what it is like to live in someone else's shoes, but everything changes during the second half of the week when the women make their own rules and get the chance to run the household their way. At the end of the week, the couples reunite for a raw, honest and highly charged exchange of views in which they make frank assessments of one another and discuss the experience.