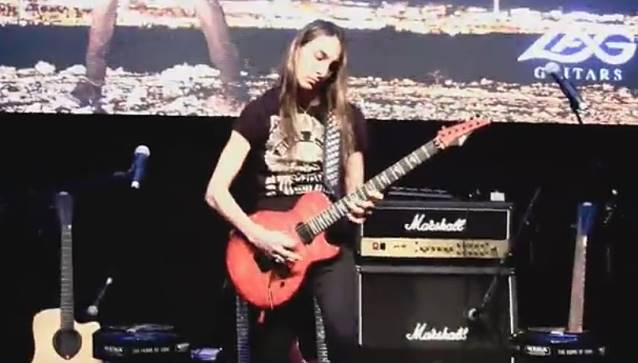 Video footage of the new BLACK LABEL SOCIETY guitarist Dario Lorina performing at this year's Musikmesse fair, which was held March 12-15 in Frankfurt, Germany, can be seen below.

Growing up listening to guitarists such as Randy Rhoads, Paul Gilbert, George Lynch and Eddie Van Halen, Dario's music harkens back to the glory days of high-caliber shred guitar, the genre of which Shrapnel Records was a founding force.

Dario Lorina's debut solo CD reveals a guitarist brimming with extreme musical ability. This guitarist brings more diverse influences into play than the average neo-classical riff monger. While technically proficient like all of the label's guitar instrumentalists, Dario's CD isn't just about shredding. It's an American guitar instrumental album having more in common with riffs reminiscent of Paul Gilbert, George Lynch and Eddie Van Halen than the European influence of guitarists such as Yngwie Malmsteen.

Phil Campbell from MOTÖRHEAD had this to say, "I think Dario Lorina is one Amazing guitar player! Having known him for many years, he never ceases to amaze me every time we hang out and jam! He blew me away when he played with us in Vegas. A true talent and an amazingly nice guy."

Dario has his own signature guitar model with Lâg Guitars, founded in 1980 and headquartered in Bedarieux, France.