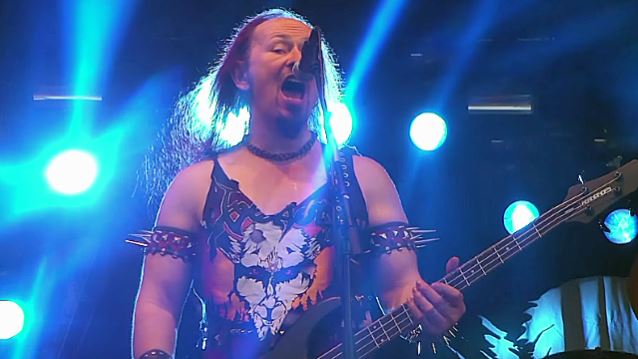 Fan-filmed video footage of VENOM's June 6 performance at the FortaRock festival at Goffertpark in Nijmegen, The Netherlands can be seen below.

VENOM's latest album, "From The Very Depths", was released on January 27 via Spinefarm. The effort was made available via CD and download.

Asked how the decision came about to start working on a new album, VENOM bassist/vocalist Conrad "Cronos" Lant told Collide art and culture magazine: " Well, we don't sort of sit down and say, 'It's time to write now.' We just write constantly until we have an album. I've heard stories of bands back in the day who were, like, 'Okay, it's time to go into the studio to write an album,' then they would sit in there and scratch their fucking heads and not have a clue. As a musician, I've always come up with ideas non-stop. I don't know where the inspiration comes from. I suppose if you like welding pipes together, you become a fucking plumber. It all just comes from everyday life. I'm not one of these people who reads a book and says, 'Oh, I'm gonna write a song about that book.'"

Regarding what caused the delay in the release of "From The Very Depths", Cronos told Full Metal Jackie: "The thing is, for many, many years, I've always had 100 percent control over everything that gets released by VENOM, as far as the songs and the music. And, you know, that's not down to being a control freak, that's down to the fact that nobody else contributes. It's always been the pain in my butt about this band. It's, like, this is not a solo band. If it was, it'd be called CRONOS. This is VENOM, and it's got a fucking guitarist and a drummer in it, and I don't think that they should be lazy and just sit and play drums when, if they're a musician, they should have ideas, they should wanna better themselves as musicians, they should challenge themselves, do things that scare them. I mean, that's what this is all about; you want those butterflies in your gut. You wanna keep this real, like a fighter. You wanna be anxious about your next fight, you wanna be anxious about your next show. You know? And when I started to put the ideas together for 'Fallen Angels' and I asked the other guys to contribute, I said to them also, 'Now you have to also get involved in the production side. Yes, I'm the producer and I'm gonna oversee the entire project, but I wanna make sure that you guys are happy with what you're doing. It's not now just my decision.' Okay, I can be sitting there, at the end of the day, as sort of the executive producer and give the yay or nay, but the delay was, really, where a song would be constructed, all the parts would be recorded, and then I would sit there and say, 'That's a go. Send it for mixing. Get it out to be mastered.' Whereas now, the delay was, I had to go see Rage [Stuart Dixon, guitar], check all his parts with him, check he was happy with it, but also that he was happy with what I was doing, happy with the vocal, happy with the bassline, happy with the drums. And I had to do exactly the same with Danté [Danny Needham, drums]. Not just check that he nailed his shit and he was happy with his drums, but, 'Are you also happy with the way the song is? Are you happy with the whole band? Are you happy with the song?' And that all takes time. So, really, it took three times longer than it normally would. But, I think, at the end of the day, you get a better product, because you get a better album that you know everybody loves. I've always said, we make VENOM albums for VENOM. At the end of the day, I have to stand there and get behind that album and say, 'I believe in this album. I trust this album. This album is what I fucking believe to be black metal.' When we do concerts, that's for the legions. If the legions wanna tell me what songs to play, I'm happy to play the songs they wanna hear. But when it comes to the album, that's up to us. If you like it, great. If you don't, go and fucking take a hike, because we don't really care. But it is great when people dig your shit."