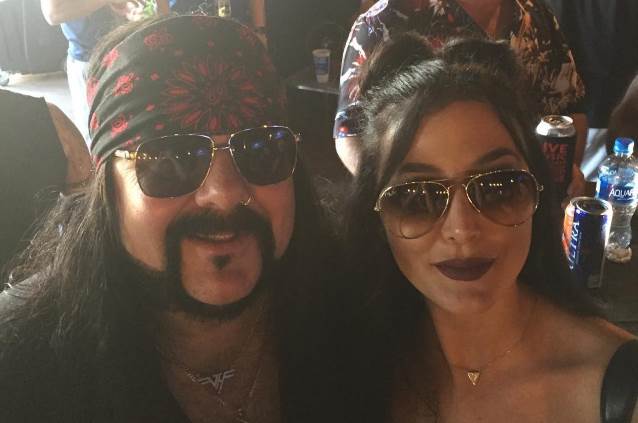 Vinnie Paul Abbott's longtime girlfriend has thanked her social-media followers for their support, two days after the former PANTERA drummer died at his home in Las Vegas. He was 54 years old.

Chelsey Yeager took to her Instagram earlier today (Sunday, June 24) to share a photo of her kissing Vinnie Paul in a car, along with the following message: "I want to thank each & every one of you guys for sending your love! Please please give me & all of our family/friends time. I can't begin to describe the pain in my heart from this nightmare... I have absolutely no other words."

Yeager and Vinnie Paul had reportedly been a couple for at least five years prior to the drummer's tragic death. They lived in Las Vegas.

Some of the last photos uploaded by Yeager before Vinnie Paul's passing showed the two of them together at her birthday party on June 7.

Vinnie Paul's body has been turned over to the medical examiner to determine a cause of death, and after that, he will be flown back to his home state of Texas to be buried between his mother and brother.

I want to thank each & every one of you guys for sending your love! Please please give me & all of our family/friends time. I can’t begin to describe the pain in my heart from this nightmare... I have absolutely no other words.

Tonight my @dallasstars WIN and the @vegasgoldenknights are crushing WINNIPEG JETS!!! It's great to be a hockey fan and my babe @chelseyeagerxo loves it too!! #goknightsgo

Well I found out last night my babe can't play pool!! I won 8 games in a row before she gave up ??great times in traverse city Michigan ????????