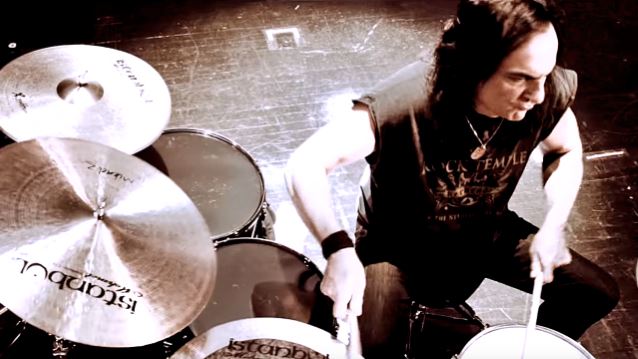 "What's gonna happen is we're going to do some dates on the West Coast at the end of October, and then we're gonna go over to Europe and do about a month there with SAXON and a couple of other bands, and a couple of dates on our own, and a festival or two in there," Appice told "The Chainsaw Symphony". "And next year we'll be around, because the schedule has opened up for Viv more, and we hope to do a good tour of the U.S. too. 'Cause we haven't really played, you know. We only played a lot out in California here and a couple of festivals. We did Rocklahoma, we did a festival in Japan, and the rest… there were far and few between. So we haven't really gone out and bombarded the audience with this yet. And a lot of people can't wait for us to come to their cities. So it looks like next year we'll be able to do that. And then we'll be able to hit all the big festivals in Europe too."

Vinny also praised LAST IN LINE's live performances, saying: "The band kicks ass. It's so much fun to play together. We have a great time on and off the stage. It's just a real pleasure playing, especially with Viv again. He's such a great guy, and he's having so much fun playing this stuff, and so am I."

He added: "We're not doing this to just go out and try to make money; we're doing this 'cause we wanna do it. And Viv is totally into this and totally enjoying playing this stuff, and revisiting his old solos. He's burning again; he just plays so great. So it's a great band. If you see us, you'll see that we're all having a great time on stage, and that's important."

LAST IN LINE's debut album, "Heavy Crown", was released on February 19, 2016 via Frontiers Music Srl. The CD was recorded at a Santa Clarita, California studio with producer Jeff Pilson, a veteran bassist who has played with DIO, FOREIGNER, DOKKEN and T&N, among others.

LAST IN LINE has recruited Phil Soussan (OZZY OSBOURNE, BEGGARS & THIEVES, Steve Lukather) to play bass for the group for all dates in support of "Heavy Crown". Also joining them at the shows is virtuoso keyboardist Erik Norlander (Lana Lane).

Soussan made his live debut with LAST IN LINE on April 14 at Count's Vamp'd Rock Bar & Grill in Las Vegas, Nevada.

Appice and Soussan had done a number of shows together as members of the all-star jam band BIG NOIZE.

Original LAST IN LINE bassist Jimmy Bain passed away in late January at the age of 68. He was reportedly suffering from lung cancer at the time of his death.