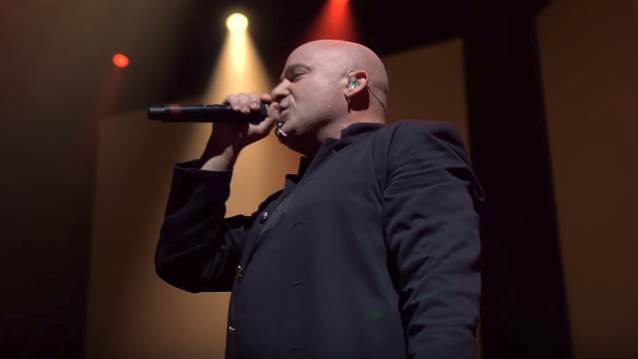 Prior to launching into the song, DISTURBED frontman David Draiman told the crowd: "Our very first Ozzfest, PANTERA was on the main stage. And every night — every night — somehow, I ended up finding my way backstage to the PANTERA dressing room; in fact, I think most of the band did. And they were always so welcoming — they had the warmest heart, and Vinnie especially. Don't get me wrong, I will always love Dime [late PANTERA guitarist 'Dimebag' Darrell Abbott], and everyone will always love Dime — he is one of the greatest legends to ever grace the face of the planet. But personally, I don't feel enough has been said about the incredible heart, the majesty and the unbelievable level of musicianship that just came from Vinnie Paul.

"It's funny, because as I was hanging out with them, Dime wasn't really into our stuff," Draiman continued. "He was all telling Vinnie, 'I'm not into all that jumping-up-and-down shit.' Well, we're all about the jumping-up-and-down shit here. And Vinnie said, 'No, no, no, Dime, I'm telling you, you've gotta give these guys a chance. You've gotta give them a listen to.' And by the time our second Ozzfest came around, we were lucky enough to open up the second stage in our hometown of Chicago. And Vinnie and Dime made it out to the show just to come see us. They weren't playing, PANTERA wasn't on the bill — they came to see us. And an area that could probably accommodate maybe 10 thousand people at most at that side stage was swarmed with 25 thousand people that day. And I'll never forget, after the whole experience went down, which was met with a mixture of both shock and wonder, and some regret, because it wasn't the safest situation. But Vinnie and Dime were both blown away, and Vinnie became such a dear friend and such a huge supporter. And I miss him so very, very much, and I know you guys do too. I'm sorry — I'm starting to get a little choked up here.

"So, as always, I feel, and I think you'll share my opinion, that the best way to pay tribute to our heroes is to play their music, David added. "So, Danny" — addressing DISTURBED guitarist Dan Donegan — "why don't you remind me how that one tune we always used to play with them started?"

Vinnie Paul was buried on June 30 next to his brother and their mother, Carolyn, at Moore Memorial Gardens cemetery in Arlington, Texas. He was laid to rest in a custom "Kiss Kasket" provided by KISS members Gene Simmons and Paul Stanley as a gift to Vinnie's family. Vinnie was also buried in some of his trademark clothes, including his hat, shoes and flannel.