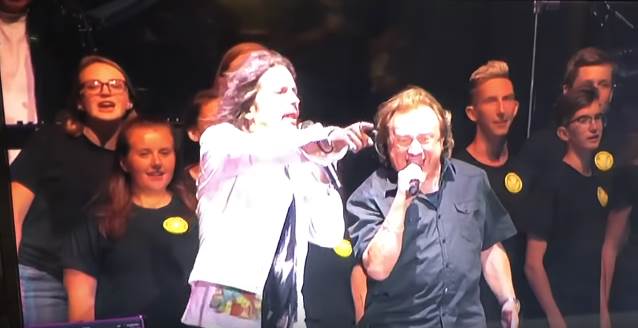 FOREIGNER received a little help from local students in the Stevens High School choir when the band performed Saturday night (August 4) at The Sturgis Buffalo Chip in Sturgis, South Dakota.

The legendary rockers were joined on stage by the high school choir during one of the band's biggest hits, "I Want To Know What Love Is".

Although FOREIGNER had played the largest stage at the Sturgis Motorcycle Rally before, this was the group's first appearance with a choir. In addition, FOREIGNER's current lineup was expanded with the addition of several other original members — singer Lou Gramm, keyboardist Al Greenwood, multi-instrumentalist Ian McDonald along with longtime bassist Rick Wills.

FOREIGNER has announced four more concerts featuring all current bandmembers plus the original bandmembers who helped to put the iconic group on the map more than forty years ago. Dubbed "Double Vision: Then And Now", the shows are November 9 at Microsoft Theater in Los Angeles, California; November 10 at Agua Caliente Casino in Rancho Mirage, California; November 30 at the Hard Rock in Atlantic City, New Jersey; and December 1 at Mohegan Sun Arena in Uncasville, Connecticut.

"Time has healed a lot, so onwards and upwards," Gramm recently told Rapid City Journal of the renewed friendship he has with his former bandmates.

"We just go out there and have a lot of fun," guitarist Mick Jones, who is the sole remaining founding member in FOREIGNER's current lineup. told the Daily Herald. "The old members love it. Lou and our present singer, Kelly Hansen, get along like a house on fire… In the end, both Lou and Kelly really respect each other's vocal ability. You know, they push each other on. It's great to see it; I'm so happy. Because what Lou and I did together, it's a separate entity in a way, but to be able to look back and to see actually how much we did achieve together, I think it's been really great for that recognition."

The reunion shows come on the heels of the 40th anniversary of FOREIGNER's best-selling album, "Double Vision".