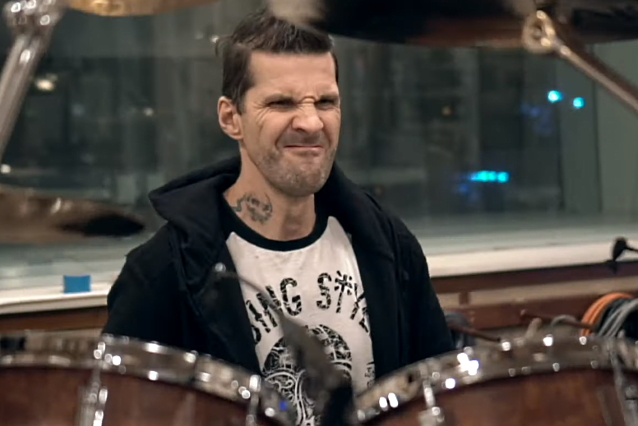 HELLOWEEN's as-yet-untitled new album will see the legendary German power metallers going "back to the roots," with the band recording fully analogue and Dani Löble playing the drum kit previously used by HELLOWEEN's original drummer, the late Ingo Schwichtenberg, on the legendary "Keeper Of The Seven Keys" recordings. A sneak peek is available in the video below.

The "Pumpkins United" lineup of HELLOWEEN recently entered the H.O.M.E. Studios in Hamburg (where everything started in 1984) to work on brand new song material. The same recording console used for such HELLOWEEN albums as "Master Of The Rings", "Time Of The Oath" and "Better Than Raw" is now being utilized to record the band's new studio album, which will feature singer Michael Kiske and guitarist Kai Hansen. Due at the end of August or beginning of September 2020, the disc is being produced by Charlie Bauerfeind and Dennis Ward, who are excited about the quality of the material they have on offer from the band.

"The 'Pumpkins United' world tour 2017-2019 forged us into a real band," said singer Andi Deris. "We are all very keen in recording a new studio album now. Artistically, it's extremely thrilling."

Earlier in the month, HELLOWEEN announced the "United Alive World Tour Part II", set to kick of in September 2020.