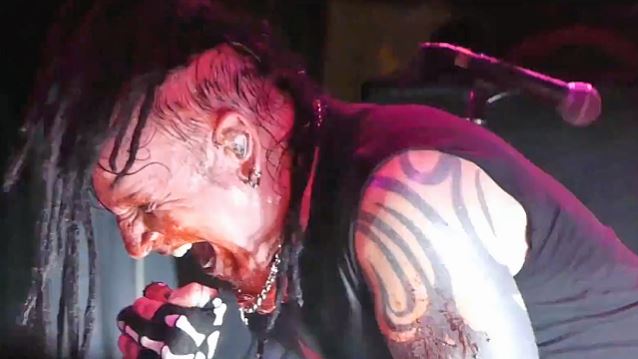 Fan-filmed video footage of HELLYEAH's July 3 performance at House Of Blues in North Myrtle Beach, South Carolina during "The Hellpop Tour" with IN THIS MOMENT can be seen below.

HELLYEAH's fifth album, "Unden!able", debuted at No. 18 on The Billboard 200, having shifted 21,000 equivalent album units in the week ending June 9.

HELLYEAH's previous album, 2014's "Blood for Blood", was the album metal fans and critics were waiting for HELLYEAH to make, based on the revered metal pedigree of the individual members. Such an artistic achievement — the album debuted at No. 1 on the Billboard Hard Rock album chart — meant the band set the bar incredibly high. HELLYEAH does not disappoint with "Unden!able".

"We turned a corner with 'Blood For Blood' and we wanted to continue that path," Paul states. "It's much heavier and darker, and we take it to another extreme."

"Unden!able" is a complete work, including the cover artwork inspired by Chad Gray and designed by William "Wombat" Felch, whom the band discovered by his artistic interpretations of HELLYEAH songs on YouTube, and whom Paul labeled "like a new member of the band," is a definitive visual matching the album's sonic wrath. It's also emblematic of the metal community and the kids who find their kindred spirits in HELLYEAH. The eyes are the portal to the soul," Gray says. "There is more extremity, so I wanted it to represent looking into the eye of someone who is a member of the metal community being cast out. You always feel like a fighter. So we created this eye and the exclamation point [in the title] as the stamp on this madness. You are looking into the soul of a metalhead."