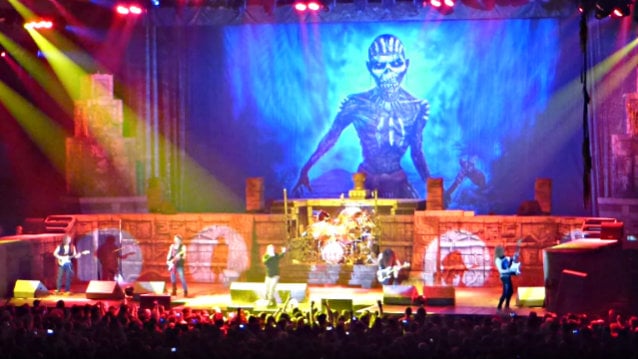 Fan-filmed video footage of IRON MAIDEN's April 29 performance at Festhalle in Frankfurt, Germany can be seen below.

MAIDEN's European tour consists of a total of sixteen dates, including three shows in Germany, eight in England, two in Scotland and one each in Ireland and Wales. The U.K. leg marks MAIDEN's first full UK arena tour in six years.

SHINEDOWN is providing support act on all sixteen dates.

"The whole band is really enjoying this tour and although we love playing festivals and stadiums, it is terrific to return to the intimacy and atmosphere of arenas.

"The songs from 'The Book Of Souls' album and the new Maya-themed Eddies and stage sets have gone down really well and fan reaction has been amazing. And, of course, we know our fans appreciate us playing a lot of the older songs too, which we will continue to do."

"The Book Of Souls" is MAIDEN's first ever double studio album and their most successful chart-wise to date, debuting at the No. 1 spot in over 40 countries around the world and No. 4 in the U.S.A.

IRON MAIDEN's "The Book Of Souls" world tour will return to North America for an extensive series of arena and amphitheater shows in June and July. Support on the trek will come from GHOST.