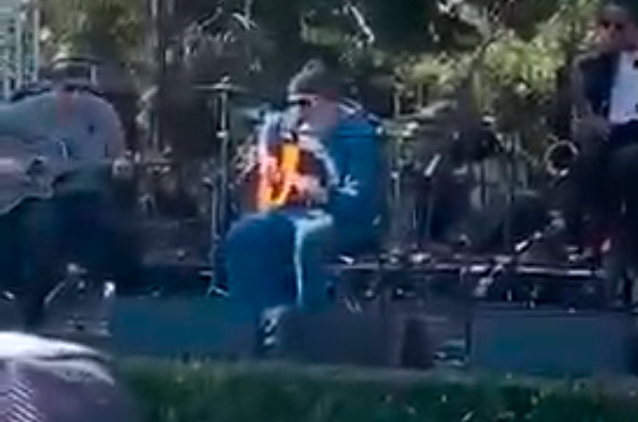 LIMP BIZKIT frontman Fred Durst performed a cover version of THE WHO classic "Behind Blue Eyes" on Saturday (February 8) in Los Angeles at a memorial for Andrew Burkle, an aspiring film producer and son of billionaire Ron Burkle. It marked the first time that Fred had sung the song live while playing an acoustic guitar. The event, which was organized by the Tony Hawk Foundation, also included performances by most of the current lineup of RED HOT CHILI PEPPERS and JANE'S ADDICTION.

LIMP BIZKIT's cover of "Behind Blue Eyes" was featured on the band's 2003 album "Results May Vary". The accompanying music video saw Durst passionately making out with Oscar-winning actress Halle Berry, star of the flick "Gothika", which featured the song. Durst, who directed the video for THE WHO cover in Los Angeles, described the finale in his treatment as "the greatest kiss you'll ever see."

LIMP BIZKIT's version of "Behind Blue Eyes" was widely panned by the music press, with The Observer writing in its album review that the song "will make you glad they invented the Stop button." Despite this, the track was released as a single, and it managed to climb to No. 71 on Billboard's Hot 100 chart (it fared a little better on the rock-radio charts, reaching No. 11 at mainstream and No. 18 at modern).

LIMP BIZKIT hasn't released a new studio album since 2011's "Gold Cobra". Since then, LIMP BIZKIT has issued four singles and promised to release a full-length collection of new material called "Stampede Of The Disco Elephants". That LP never surfaced.

LIMP BIZKIT in 2011 parted ways with Interscope, the label that released all of the band's records thus far through its subsidiaries Flip, Geffen and Suretone Records.