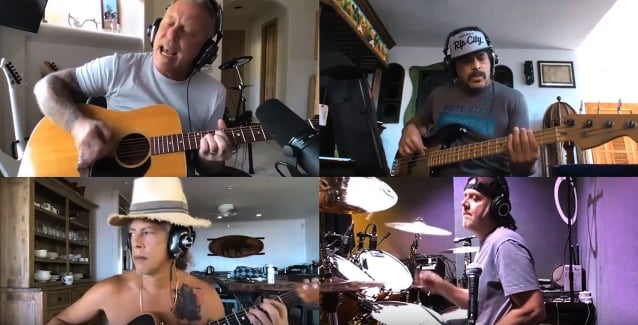 METALLICA, KORN, MASTODON, Billy Corgan, Dave Navarro and Krist Novoselic are among the artists who took part in virtual tribute performances when ALICE IN CHAINS was presented with this year's Museum Of Pop Culture (MoPOP) Founders Award on Tuesday (December 1). ALICE IN CHAINS also played at the event.

METALLICA and KORN both covered "Would?", while MASTODON offered a rendition of "Again", and a one-off supergroup featuring SLIPKNOT's Corey Taylor, FOO FIGHTERS' Taylor Hawkins and JANE'S ADDICTION's Dave Navarro and Chris Cheney played "Man In The Box".

The entire event can be viewed below.

Prior to the event, ALICE IN CHAINS guitarist/singer Jerry Cantrell said in a statement: "It feels truly special to receive the MoPOP Founders Award in our home town of Seattle. It's also humbling to be joined by so many of our friends, peers and heroes to rock some AIC tunes. Music has the power to unite, heal and inspire. It is all of ours. Let's continue to create and celebrate that which feeds the soul. Rawk on!"

ALICE IN CHAINS drummer Sean Kinney added: "When we got to make our first record, I thought, great, we will be able to make one record, do our thing and hope for the best. Now, 30 years later, to get this award and still be touring and making music is the most amazing feeling. We are brothers with all of the craziness that goes with it. This is for Layne, Mike, and for all of us now. We can't wait to get back out on the road once this hellish pandemic is behind us."

MoPOP executive director Alexis Lee said: "As our principal fundraiser, Founders Award is always a special event for MoPOP and we're thrilled this year to honor ALICE IN CHAINS and provide free access to this magical evening fans around the world. We're able to show the next generation of creators what's possible through the funds raised at the event that support our youth development programs, our community engagement and access initiatives, and the cutting-edge exhibitions people from around the world come to Seattle to enjoy."

Since 2007, the Museum of Pop Culture Founders Award has celebrated artists whose noteworthy contributions continue to nurture the next generation of risk-takers.

ALICE IN CHAINS regrouped in 2006 with William DuVall joining the band, and released its third LP with DuVall in the lineup, "Rainier Fog", in August 2018.

Over the course of its remarkable career, ALICE IN CHAINS has garnered multiple Grammy nominations, sold more than 30 million albums worldwide, and amassed a diehard international fanbase whose members number in the millions. Their discography features some of the biggest and most important albums in rock history, including 1992's quadruple-platinum-certified "Dirt", 1994's triple-platinum-certified EP "Jar Of Flies", which was the first EP in music history to debut at No. 1 on the Billboard Top 200 and 1995's self-titled double-platinum-certified "Alice In Chains", which also entered the Billboard Top 200 at No. 1. They returned in grand style in 2009 with the critically acclaimed "Black Gives Way To Blue", which hit No. 1 across the rock and alternative charts, earned a Grammy nomination, was certified gold and hailed by Vice as "a record that's as powerful as anything the band has done." The band’s latest album released in 2018, "Rainier Fog", hit No. 1 across Billboard's Rock, Alternative and Hard Music charts and No. 1 on the iTunes Rock album chart and earned them a Grammy nod for "Best Rock Album." ALICE IN CHAINS remains one of the most successful and influential American rock bands of all time.