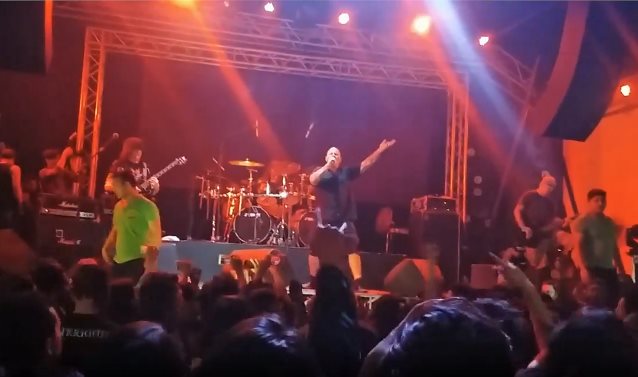 Fan-filmed video footage of NITRO, the band featuring guitar virtuoso Michael Angelo Batio, vocalist Jim Gillette and LAMB OF GOD drummer Chris Adler, performing the songs "Walk With Me In Hell" (LAMB OF GOD) and "Symphony Of Destruction" (MEGADETH) on September 27 at Purple Haze Rock Bar in Kathmandu, Nepal can be seen below.

The new NITRO disc is being helmed by producer Kane Churko, who has previously worked with DISTURBED, FIVE FINGER DEATH PUNCH, IN THIS MOMENT, HELLYEAH and PAPA ROACH. In addition to producing the disc, Churko is contributing his songwriting talents to the project.

Gillette told Metal Rules about the musical direction of the new NITRO material: "It's very, very heavy. I don't think you can get any heavier.

"It's funny — the first run with NITRO, we started off super heavy," he continued. "I don't want to blame anyone as we had the ultimate decision, but it got shaped and molded by guys in suits that had no clue. All they wanted us to do was to sing higher and play faster. It spun out of control. If the goal was to be the fastest and the highest, we achieved our goal. We just had the wrong goal. [Laughs] Our goal should have been to write some kick-ass heavy metal. You have to bend a little; otherwise the checks stop coming. This time we didn't have any men in suits telling us what to do. We are doing what we always envisioned what NITRO should be."

Batio told the "Talking Metal" podcast that the new NITRO songs would feature a different vocal and musical approach to what the band was previously known for.

"To categorize what we are doing — think part LAMB OF GOD and a very small part that nods to the past [of NITRO], only because Jim is singing first and the music is super, super aggressive. I am using all seven strings on the guitar. It's mean. It's really mean."

Regarding how Adler got involved with the project in the first place, Michael said: "Neither one of us actually knew him. We were at my house, recording demos and writing songs. I'm a really good drum programmer. I'm doing these advanced-level drums and Jim goes to me, 'Who do you think we should get for drums?' We're shaking out heads and he goes, 'Chris Adler.' And I'm thinking, 'LAMB OF GOD's drummer?' Neither one of us ever met him, but, I've worked with a publicist named Suzanne Penley; her significant other, Dave Vincent from MORBID ANGEL, he's a super-close friend of mine, and she works with Chris. So I called Suzanne and I told her we're interested in getting Chris for the album, and it turned out Chris is a fan of mine! And so the whole thing just worked itself out and Chris is in the band now."

Michael added: "He's absolutely fantastic, my favorite metal drummer. There's not many people when you listen to drums you know who it is — and he's one of those. He's got a very distinct style and he can play anything."

A release date for the new NITRO album will be announced soon.