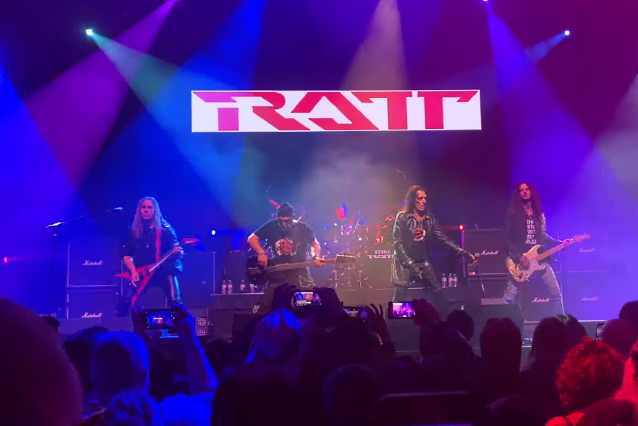 Fan-filmed video footage of RATT's December 20 concert at the Wellmont Theater in Montclair, New Jersey can be seen below.

Pearcy recently confirmed to The Metal Voice that RATT is planning to make new music available in 2020.

"The format of music and releasing and this and that is so different," he said. "I always release solo records, pretty much every year, just because I like to write and try different things, expressions and whatever.

"With RATT, we're gonna shoot for a record," he continued. "We're gonna probably release a couple of singles first. And see what happens. If it fires up, we'll go ahead and do a record. That's the easy part. Having the songs is the hard part. [Laughs] We'll release a couple and see what happens. Of course, we're hoping for people to get off on it. It's been quite a while."

Asked about the musical direction of the new RATT material, Stephen said: "Of course it's gonna be in the RATT norm. We get Juan [Croucier, bass] on backup vocals and we get him with arrangements and writing too. When we get into RATT writing mode, something just clicks there. We know what is RATT music and what isn't. But we'll see what happens. I'd like to get a little more melodically aggressive — something like the EP or in between [1984's] '[Out Of The] Cellar' and [1985's] 'Invasion [Of Your Privacy]'. We're shooting for some harder 'Ratt 'n' roll.'"

This past January, Pearcy underwent knee surgery. The operation came three months after two disastrous RATT shows that saw the now-63-year-old singer incapacitated to the point where he had trouble remembering the words to some of the band's biggest hits.