The PANTERA and HELLYEAH drummer was buried on Saturday (June 30) next to his brother, PANTERA guitarist "Dimebag" Darrell Abbott, and their mother, Carolyn, at Moore Memorial Gardens cemetery in Arlington, Texas.

Vinnie Paul explained in a 2006 interview: "[Dimebag's] number was three, you know. And every day, 3:33 will appear on the clock, and I don't even mean to look at it, and it just reminds me of him every day. It doesn't matter if it's at night or during the day. I'll be doing something. I'll be right in the middle of something, busy, busy, busy, and I'll look over, and by gosh it's 3:33."

Vinnie passed away on June 22 at his home in Las Vegas at the age of 54. The drummer's death "did not appear suspicious," according to the official report of the event recorded by Metropolitan Police officers. Sources close to Vinnie told the Las Vegas Review-Journal that he suffered a "major heart attack," but that information has not been corroborated yet by an official source.

Vinnie had reportedly finished laying down drum tracks for the next HELLYEAH album, although there is no word yet on when that LP will see the light of day.

VINNIE PAUL: A PUBLIC CELEBRATION OF LIFE. ? Live from The Bomb Factory in Dallas, TX. 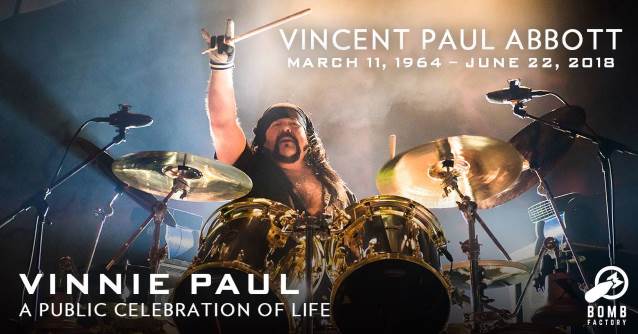