Wednesday 13, who mixes punk rock and metal with kitschy horror imagery and who is formerly one half of the MURDERDOLLS braintrust, will return to the road this summer in support of his new album, "Condolences". Support on the trek will come from ONCE HUMAN and GABRIEL AND THE APOCALYPSE.

Wednesday 13 will release his seventh solo studio album, titled "Condolences", on June 2 via Nuclear Blast Entertainment. The follow-up to 2015's "Monsters Of The Universe" was produced by Chris "Zeuss" Harris, who previously worked with Wednesday 13 and guitarist Roman Surman on the 2010 MURDERDOLLS album "Women & Children Last". The artwork was created by Travis Smith (OPETH, KATATONIA, NEVERMORE) and can be seen below.

The official video for the song "What The Night Brings" can be seen below.

Wednesday 13 told Creative Loafing that "Condolences" may be his darkest and heaviest album to date. "The campiness is kind of gone off of this record," he said. "It's definitely heavier, and definitely the best-produced sounding thing, I think, I've ever recorded. A lot of people go, 'He's serious now!' Well, I'm 40 years old now. I'm growing with the music, my band, everything, and this record definitely has some experimenting with different sounds and things. The sense of humor is still always there, but maybe not as campy as it's always been, and sometimes that comes off more serious."

He continued: "It's just a dark, weird record, kind of inspired by basically everybody who seems to be dropping around us. I kept seeing, 'Condolences, sorry for your loss,' and I saw that, and I themed the record around what's in the air right now." 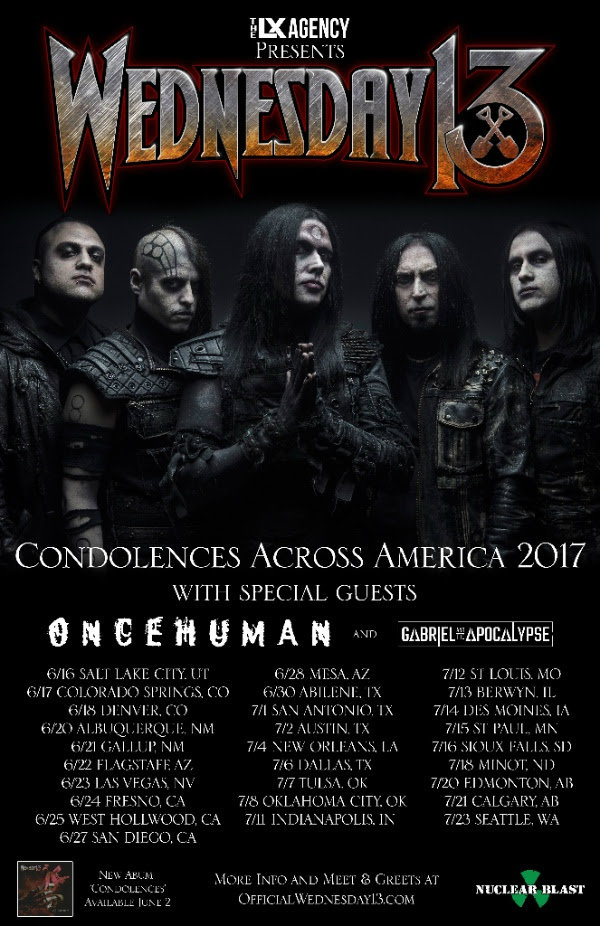