All IRON MAIDEN fans are being invited to share their "Maiden Moment." By submitting a short video explaining their favourite IRON MAIDEN memory, they are in with a chance of winning some one-off, exclusive, never-to-be-seen-again MAIDEN prizes.

To enter, all you need to do is post a video no longer than 90 seconds to the Nordoff Robbins Facebook page and "like" Nordoff Robbins – Music Transforming Lives and you could win a replica of the red "Trooper" jacket worn by MAIDEN vocalist Bruce Dickinson, signed by the singer himself and limited-edition vinyl picture discs of the first eight IRON MAIDEN albums packaged in gatefold sleeves and housed in a collector's box. A lucky runner up will also receive limited-edition black vinyl discs of the first eight IRON MAIDEN albums.

Every two days, Nordoff Robbins's panel of judges is selecting an entry from the clips posted to the Nordoff Robbins Facebook page to be shortlisted. The winner will be chosen from the five shortlisted videos and announced on the morning of the O2 Silver Clef Awards, July 3.

IRON MAIDEN's eagerly awaited new studio album, "The Book Of Souls", will be released globally on September 4 through Parlophone Records (Sanctuary Copyrights/BMG in the U.S.A.). It was recorded in Paris with their longstanding producer Kevin "Caveman" Shirley in late 2014, with the finishing touches added earlier this year. However, the band decided to delay its release so that vocalist Bruce Dickinson, who was recently given the all-clear from a tumour, would have time to recuperate sufficiently to join in the preparations for the album's launch. 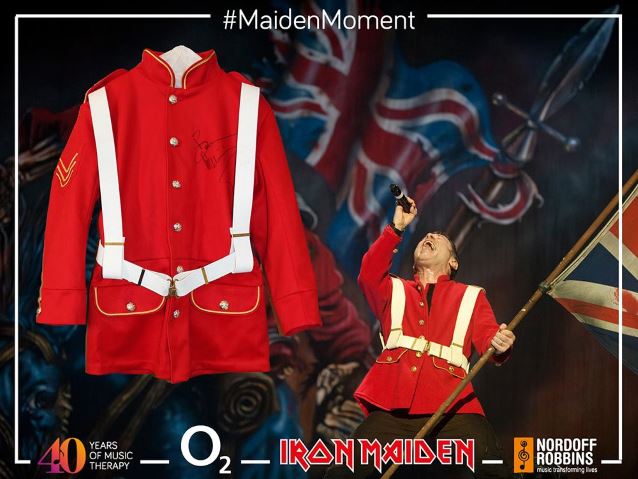