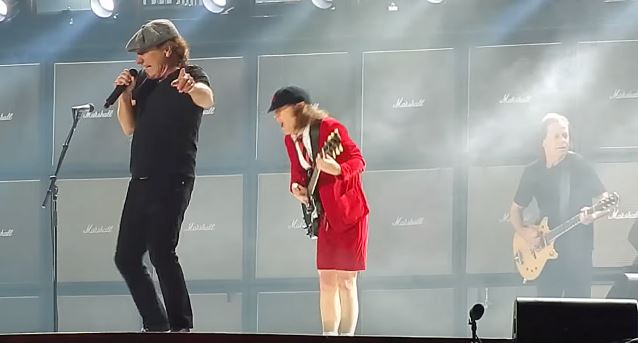 According to Stuff.co.nz, a temporary ban on liquor for AC/DC's December 15 concert at Western Springs Stadium in Auckland, New Zealand has been instituted by a local council.

Waitemata Local Board voted unanimously in support of a temporary liquor ban at their board meeting on November 10.

A senior sergeant with the Auckland police wrote a letter to the Auckland council requesting the dry zone around Western Springs Stadium, explaining that temporary liquor bans have "significantly assisted in curbing alcohol-related harm and offending in public areas." He added that an inspector also went through "the levels of intoxication and alcohol-related harm that was likely at this type of event."

The ban will be in effect for 24 hours around the arena, beginning at 6 a.m. on December 15. There will be a $250 fine for those caught consuming or in possession of alcohol. Surrounding streets in a loop around the stadium and the Auckland Zoo will also be included in the restricted area.

AC/DC's sixteenth studio album, "Rock Or Bust", has sold around 552,000 copies since debuting at No. 3 on the Billboard album chart back in December 2014.

It's the band's first album without founding guitarist Malcolm Young, who is suffering from dementia. He has been replaced by nephew Stevie Young.

AC/DC drummer Phil Rudd was arrested last November at his home in Tauranga, New Zealand on charges of threatening to kill and possession of methamphetamine and cannabis.

Although Rudd played on "Rock Or Bust", he did not appear in photos or videos for the disc.

One-time AC/DC drummer Chris Slade officially joined the band's lineup for its performance on the February 8 Grammy Awards telecast. Slade is also behind the kit for the group's current world tour.