Tickets will be available Friday, August 28 at 10:00 a.m. local time at www.HardDriveLiveFallout.com.

WE CAME AS ROMANS vocalist Dave Stephens comments, "We've known ALL THAT REMAINS for almost as long as we've been a band and we're ecstatic we've finally got a chance to tour together. It's an idea we've always talked about, so we figured why not finally make it happen. It's a true blessing to be on tour with these bands and be a part of the HardDrive Live Fallout Tour."

ALL THAT REMAINS lead vocalist Phil Labonte adds: "ALL THAT REMAINS is excited to announce we'll hitting the road with WE CAME AS ROMANS and working with HardDrive again this fall. Last time we did a 'HardDrive Live' tour was in 2008 and we had a great time! We expect the same this time! VIP packages will be available so get your tickets early!!"

EMMURE's Frankie Palmeri comments on the upcoming tour: "We are happy to hit the road again with our friends WE CAME AS ROMANS and ALL THAT REMAINS."

ALL THAT REMAINS continues to tour in support of its latest studio album, "The Order Of Things", which was released this past February via Razor & Tie.

WE CAME AS ROMANS released its self-titled album on July 24. The CD was recorded with multi-platinum, award-winning producer David Bendeth (BRING ME THE HORIZON, PARAMORE, OF MICE & MEN). 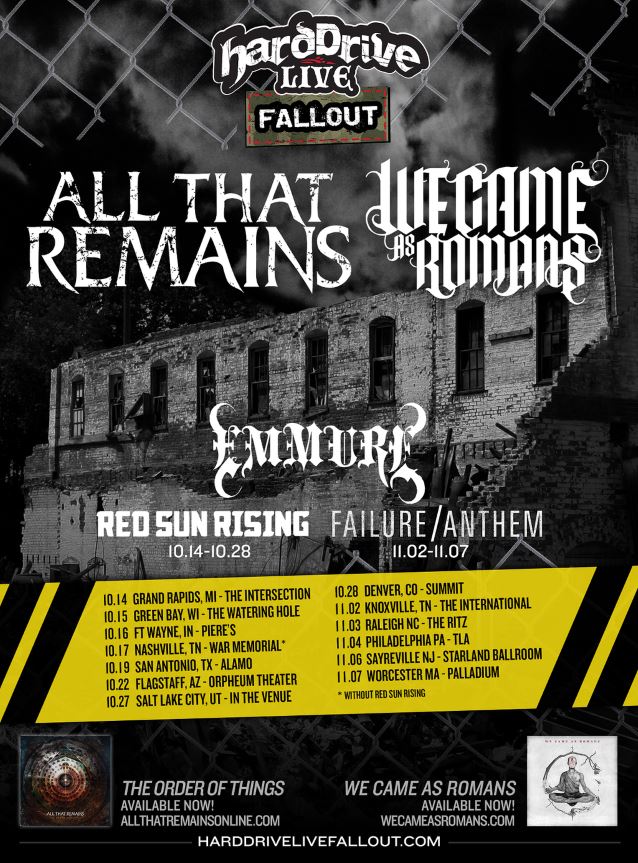