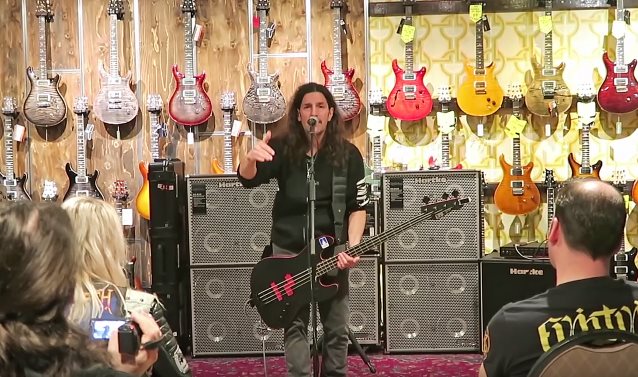 Video footage of ANTHRAX bassist Frank Bello's February 18 Hartke-sponsored clinic at Dijkmans Muziek in Breda, The Netherlands can be seen below (courtesy of Emmelie Herwegh).

Asked about his increased number of clinic tour dates in recent years, Bello told Legendary Rock Interviews: "Man, I just love doing those things. Man, I don't know why, but it really appeals to me to get out there and talk and show some things to kids or adults or anyone who's just really interested in learning bass or getting into music. It honestly feels good to go and do stuff like that and I can't emphasize that enough."

ANTHRAX's February 15 concert at the Barrowland in Glasgow, United Kingdom was filmed for a DVD, to be released later this year via Megaforce. Seventeen cameras, including five GoPros and a full-size camera crane, captured more than two hours of ANTHRAX favorites that were voted onto the evening's set list by fans and included "Madhouse", "Be All, End All", "Breathing Lightning" and "A.I.R.", followed by ANTHRAX's classic 1987 album "Among The Living" performed start to finish. In addition to the live footage, the DVD will include "fly-on-the-wall" interviews and other B-roll shot on the band's tour bus, backstage, in hotels and elsewhere.

The DVD is being produced and directed by Paul Green of the Manchester, U.K.-based Paul Green Productions who has filmed concerts for OPETH, THE DAMNED, Gary Numan, THE LEVELLERS and many others.