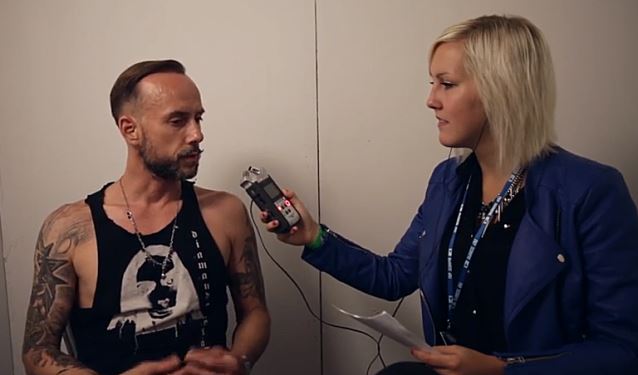 Sofia Metal Chick conducted an interview with Adam "Nergal" Darski of Polish extreme metal veterans BEHEMOTH on August 9 at the Getaway Rock festival in Gävle, Sweden. You can now watch the chat below. Also available is fan-filmed video footage of the band performing a brand new song, "Blow Your Trumpet, Gabriel", at the event.

"Blow Your Trumpet, Gabriel", which was previously described by Darski as "killer" and "a monster," will be included on the band's tenth full-length album, "The Satanist", due in early 2014 via Nuclear Blast in Europe and Metal Blade in North America. The CD was recorded at Hertz studio in Bialystok, Poland with the help of the Wieslawscy brothers and Daniel Bergstrand (MESHUGGAH, IN FLAMES, SOILWORK, STRAPPING YOUNG LAD). Other songtitles set to appear on the effort include "Messe Noir" (French for "The Black Mass") and "Ora Pro Nobis, Lucifer" (Latin for "Pray For Us, Lucifer").

In a recent interview with Revolver magazine, Darski described BEHEMOTH's new songs as "very atmospheric" and "very emotional." "Think BURZUM meets NEW ORDER meets KILLING JOKE," he added. But at the same time, fans shouldn't expect the album to sound too far removed from BEHEMOTH's past efforts. "Take SLAYER, for example," Darski said. "Whatever genre they deal with, they still end up sounding like SLAYER. Even when they were flirting with nu-metal, it was a SLAYER record. Same with BEHEMOTH."

According to Darski, at least some of the inspiration for the new BEHEMOTH album is coming from his five-month bout of leukemia he overcame in January 2011, after receiving a bone-marrow transplant. "When I was in the hospital, I was collecting experiences and emotions," he said. "I'm pretty sure that it's coming out now. There are moments I catch myself thinking about how my state was back then. It was me versus life, me versus death. It definitely changed my thoughts a lot. It's 100 percent being reflected in the record and songs I'm writing nowadays. I'm way more radical than I used to be."