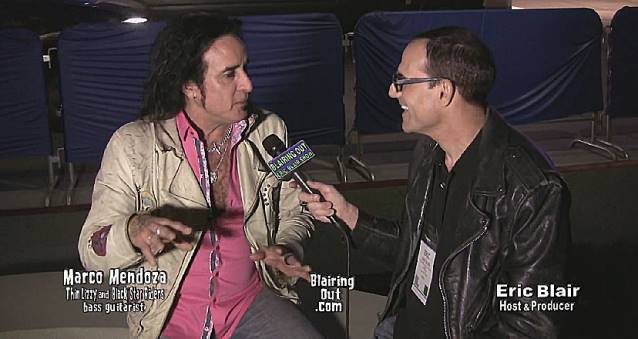 Eric Blair of "The Blairing Out With Eric Blair Show" conducted an interview with BLACK STAR RIDERS bassist Marco Mendoza at this year's NAMM (National Association Of Music Merchants) show, which took place January 23-26 at the Anaheim Convention Center in Anaheim, California. You can now watch the chat below.

Comments Warwick: "Joe Elliott's passion, enthusiasm for music, as a fan, artist and friend is unquestionable and Ronan McHugh is a phenomenal engineer.

"Personally, having worked with these guys before, it was a no-brainer when they said they would like to produce the new BLACK STAR RIDERS album.

'We are confident that this will be a huge leap forward in the evolution of BLACK STAR RIDERS."

Adds Elliott: "Having worked with Scott on the THIN LIZZY remixes a few years ago and having produced Ricky's first two solo albums, I'm looking forward to taking our musical journey together even further.

"We're aiming to make a serious leap forward with the next album and I'm proud to be able to contribute to the next chapter in the BLACK STAR RIDERS story."

States Johnson: "We are all excited about working with Joe; he is like part of the family. And recording this album in Ireland is a special treat for us."

BLACK STAR RIDERS's debut album, "All Hell Breaks Loose", sold around 2,200 copies in the United States in its first week of release. The CD landed at position No. 5 on the Top New Artist Albums (Heatseekers) chart, which lists the best-selling albums by new and developing artists, defined as those who have never appeared in the Top 100 of The Billboard 200.

The "All Hell Breaks Loose" artwork features a painting by Gil Elvgren (March 15, 1914 - February 29, 1980), the legendary U.S. painter best known for his work on pin-up girls, advertising and illustration.

The album was released as a standard CD and also as a special-edition digipak featuring a bonus track, "Right To Be Wrong", and a "making-of" DVD.