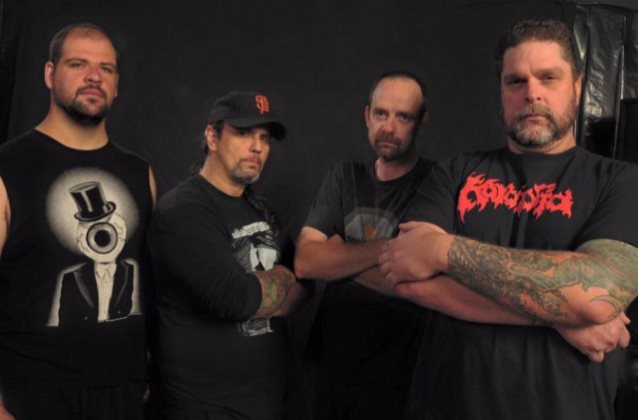 Mighty Music has announced the signing of Florida death metal veterans BRUTALITY. The band's comeback album, "Sea Of Ignorance" — which was originally issued in 2016 — will be re-released in Europe on May 26 on LP, CD and digital. A new studio effort is planned for 2018.

BRUTALITY has been devastating the underground since 1986. In 1988, they released their first demo, "Brutality", which gained them recognition in the underground fanzines. Their second demo, "Dimension Demented", was recorded in 1990, and a seven-inch EP called "Hell On Earth" was issued via Gore Records.

1991 saw the arival of "Metamorphosis", a cassette EP that received worldwide distribution on Wild Rags Records.

After necessary lineup changes in 1992, the band propelled forward and into the studio to record a new demo. The band utilized this demo to shop for a record deal and found interest from many different labels. They signed with Nuclear Blast and released a two-song seven-inch EP called "Sadistic".

With continued efforts to improve their sound and direction, additional lineup changes were made in 1995 and they started writing their third album, "In Mourning". The disc was released in 1996.

After years of hard work, BRUTALITY decided to disband to pursue family life and careers away from music.

All three of BRUTALITY's albums were re-mastered and released in 2008 on Metal Mind Productions with unreleased bonus tracks.

In 2012, BRUTALITY reformed and released the EP "Ruins Of Humanity" on CD in the U.S. and on seven-inch EP vinyl in Europe through Mighty Music.

"Sea Of Ignorance" was originally released in the States and South America through BRUTALITY's own label in 2016.