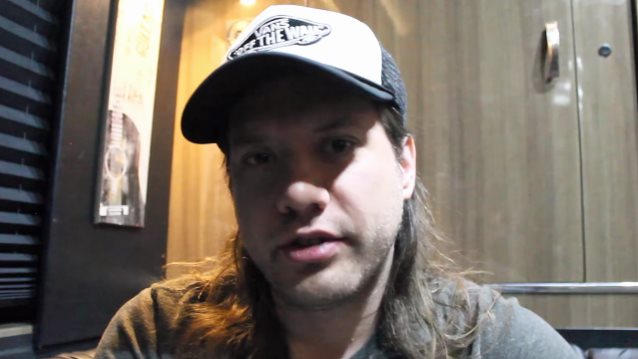 Miguel of The Age Of Metal conducted an interview with keyboardist Janne Wirman of Finnish metallers CHILDREN OF BODOM prior to the band's December 7 date at The Pressroom in Phoenix, Arizona. You can watch the full chat below. A few excerpts follow (transcribed by BLABBERMOUTH.NET).

On the reception to the band's latest album, "I Worship Chaos":

On if he thought the band would make it to 20 years upon their 1997 formation:

Janne: "No. It seems pretty weird today to think about that we've been doing this now for 19 years. We were 17, 18 when we started, so nobody ever thought we would be doing this in 20 years' time. But shit happens sometimes."

On his memories of recording and releasing their 1997 debut, "Something Wild":

Janne: "It was a bit of a different time in terms of many things. We were young and inexperienced and just a bit too excited about everything. Even in terms of music technology, it was recorded on tape, which is something totally different than nowadays. You record on computers. But yeah, so many things have changed, like everything has changed."

On if there is anything he could change about "Something Wild":

Janne: "There was a lot of technological mistakes made, bad mistakes made during the recording of the first album. I feel it's a bit — even for our age and for the time — a bit [like] amateur hour. There's a couple of pretty crucial mistakes. It is what it is; you have to start somewhere. That's where we started."

On the fact that CHILDREN OF BODOM played The Bataclan in Paris a week before the 2015 terrorist attacks:

Janne: "It felt a bit weird. Yeah, it felt a bit closer. It felt a bit more serious because we had been right there. Some of the local crew who worked at the club who I had been just dealing with at our show that day, I realized were deceased. That's when it hit me hard, like, 'Okay, that's pretty bad.'"

CHILDREN OF BODOM will perform most of "Something Wild" on a European tour later this year to celebrate the record's twentieth anniversary. The month-long trek, dubbed "20 Years Down & Dirty", will kick off on March 8 in Hanover, Germany and conclude on April 4 in Stockholm, Sweden.