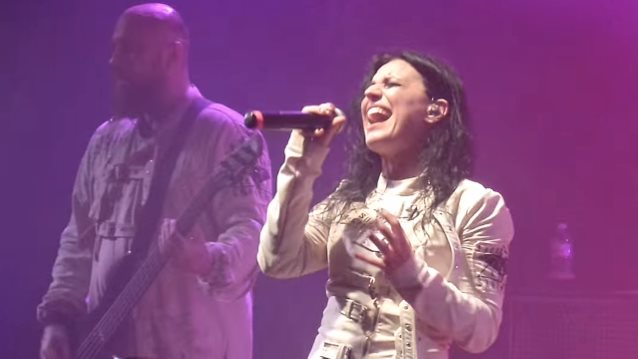 Asked about the fact so many people feel that LACUNA COIL's new album, "Delirium", has a strong musical connection to some of the band's early efforts, Cristina said: "It's not that it's our [connected to our] past; it's our present as well, because we wrote the old songs, so whatever you do, and whatever you did, it's part of you regardless. So I'm pretty happy that these old elements are coming back to life, even though they were there from Day One. It's just that we worked differently. But we always liked the growl vocals, we always liked the heaviness, and this time we just realized that we wanted this album to even heavier than in the past, so probably that's why a lot of people [are] finding a lot of connections. We've been told that this record has a lot of reminiscences of 'Comalies' [2002] and 'Karmacode' [2006], and I agree, because I believe that the spirit is pretty much the same as it was back then. It's sort of a new book of LACUNA COIL; not even a new chapter. It's something fresh from scratch."

"Delirium" was released on May 27 through Century Media. The CD was recorded at BRX Studio in Milan between December 2015 and February 2016. The effort was produced by LACUNA COIL bassist and main songwriter Marco "Maki" Coti-Zelati, with engineering by Marco Barusso and additional assistance from Dario Valentini. Coti-Zelati also created the artwork for "Delirium", which is based on an atmospheric session captured by Italian photographer Alessandro Olgiati.

LACUNA COIL has recruited Diego Cavallotti as a fill-in guitarist for the band following the recent departure of Marco "Maus" Biazzi.

Biazzi left LACUNA COIL in January, explaining in a statement: "I felt I couldn't add more in this project any longer so I decided to leave my second family, LACUNA COIL, to take a different path for a new challenge in my life.