Legendary heavy metal band BLACK SABBATH will bring its storied career to a close in its native England, with seven shows booked there in January and February. The last two, on February 2 and February 4, will take place in SABBATH's hometown of Birmingham and will likely be their final shows.

Asked if he has regrets about anything that transpired during SABBATH's nearly five-decade career, singer Ozzy Osbourne tells Kerrang! magazine: "You're talking about my fucking diary! I've made a fucking idiot of myself so many times. I don't drink anymore. I haven't drunk for four years, I haven't got stoned for four years, but back in the day when I did get stoned, I was constantly making a fucking idiot of myself, falling on my arse or some crazy fucking thing."

Guitarist Tony Iommi tells Kerrang!: "You always think there's loads of things you could've done, but would you be where you are now if you'd done them? I could say, 'Oh, I wish I hadn't done all those drugs in the early days,' but there must have been a reason, somewhere along the line, why you do these things, so you learn something and go on to the next stage. I can complain about things, but there's been a reason for it."

States bassist Geezer Butler: "It's hard to say because I believe in fate, and the whole thing has been guided by something else beyond us. There are things I could be unhappy about — the way we got ripped off in the '70s and stuff like that — but it's all worked its way out. Things happen for a reason, I really believe that, and there's nothing I can change about anything, so I don't really regret anything. And we've always maintained our friendship. It's almost like friends going on tour together. We went through such a lot together; we've got really strong bonds together."

BLACK SABBATH played its last show ever in the U.S. on November 12 at AT&T Center in San Antonio, Texas. The gig took place nearly five years to the day that the legendary act announced their reunion.

The original lineup of SABBATH came together in 1969 with Osbourne on vocals, Iommi on guitar, Butler on bass and Bill Ward on drums. That lineup recorded and toured through 1978, and periodically reformed through the '90s and 2000s for live work.

They regrouped again in late 2011 for a new album and tour, although Ward dropped out after just a few months. The remaining trio issued the "13" album in 2013 and backed it with a successful world tour — despite Iommi being treated for lymphoma since 2012. 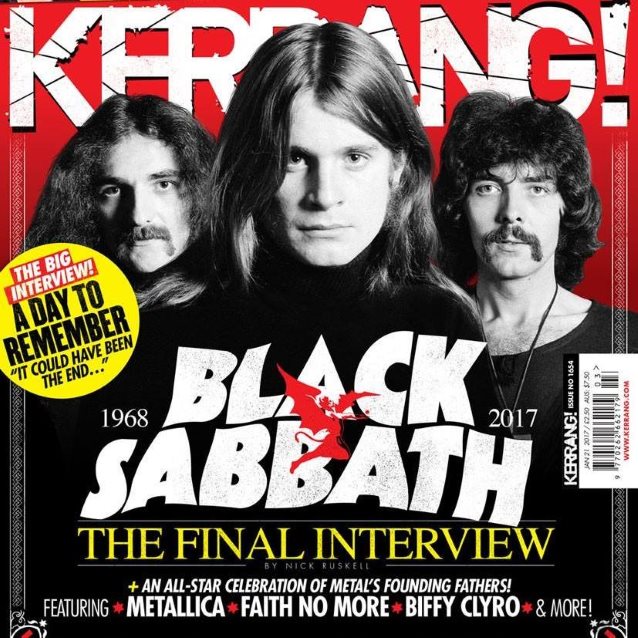