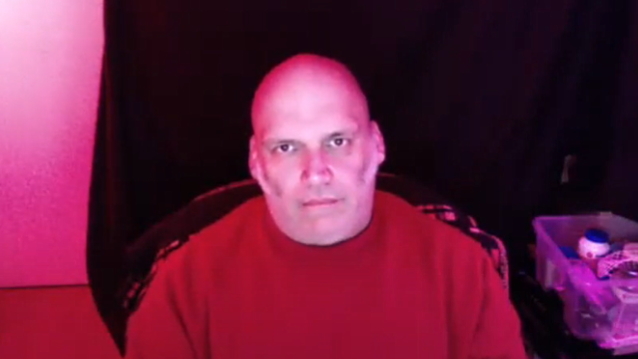 British heavy metal vocalist Blaze Bayley, who fronted IRON MAIDEN more than 20 years ago, spoke to the "Metal Talk" podcast about how the rise of grunge in the early 1990s forced most hard rock bands off the radio and MTV, with album and tour sales plummeting. "In the U.K., the British press were saying, 'IRON MAIDEN is a dinosaur. They won't last another album,'" Blaze said (as transcribed by BLABBERMOUTH.NET). "That's it. [As far as they were] concerned, it [was] over. And they got the knives out, and they were stabbing MAIDEN in the back the best they could. And it was horrible. And they were writing 'The X Factor' album off before we'd written anything. And there was no music written. [MAIDEN bassist and founder] Steve Harris said to me, 'I don't care who writes the music, who comes up with the songs; it just has to be great.' And we worked and we came up with an album, I think, of great music.

"The year I joined IRON MAIDEN, EMI sold every factory that they had that produced vinyl, CDs and cassettes," Blaze continued. "They were getting out of the manufacturing business, which had been the mainstay of the music business. Bits of plastic that you walked into a record shop and bought — be it vinyl or cassette or CD — all those bits of plastic, suddenly sales were plummeting. EMI got out. They thought everything was gonna be digital. Now we know that they were doing deals with Apple and all of that.

"So, everything was going down. Everything was against us. The shape of the music business was changing. When we did 'The X Factor' and they said that NIRVANA were gonna be the new JUDAS PRIEST or new IRON MAIDEN, it was bizarre, but that's what we were facing.

"We played in Seattle at the height of grunge, and the audience was split — visibly — from real metal fans, which was about the first five or 10 rows, 'MAIDEN is my band. I'm here to see MAIDEN. That's it. I've come to listen to the new songs,' to the back where it was, 'I've come to see the last gig of this dinosaur. I wanna say that I saw IRON MAIDEN's last tour.' It was horrible — absolutely horrible. And that's how it was. And that's what we were facing on 'The X Factor' and 'Virtual XI'.

"In the U.K., the magazines were saying 'MAIDEN is dead,'" Blaze added. "We were playing, across the world, [to] 10 thousand people a night, stadiums with 70 thousand people, 50 thousand, headlining giant festivals, but in the U.K., in our home, they were saying, 'MAIDEN's dead. MAIDEN's gone.' Well, where are they now? Grunge is gone. Heavy metal has stayed. And MAIDEN has stayed.

"BLACK SABBATH had a reunion. DEEP PURPLE had a reunion. And EMI put pressure on the band: 'We need a reunion to get interest back in IRON MAIDEN.' And far be it for me to stand in the way. Bruce came back, and that gave me a wonderful opportunity to start my solo career."

The 58-year-old Bayley, who was born in Birmingham, recorded two studio albums with IRON MAIDEN — the aforementioned "The X Factor" and "Virtual XI" — before Bruce Dickinson returned to the group. The MAIDEN albums he appeared on sold considerably less than the band's prior releases and were their lowest-charting titles in the group's home country since 1981's "Killers".

Since leaving IRON MAIDEN in 1999, Bayley has released a number of albums, including several under the moniker BLAZE and more than a handful under his own name. He also appeared on 2012's "Wolfsbane Saves The World", the first album of new material by WOLFSBANE since the group's self-titled 1994 effort.

Blaze's latest solo album, "War Within Me", came out in April. All songs were written and produced by Blaze and guitarist Christopher Appleton.