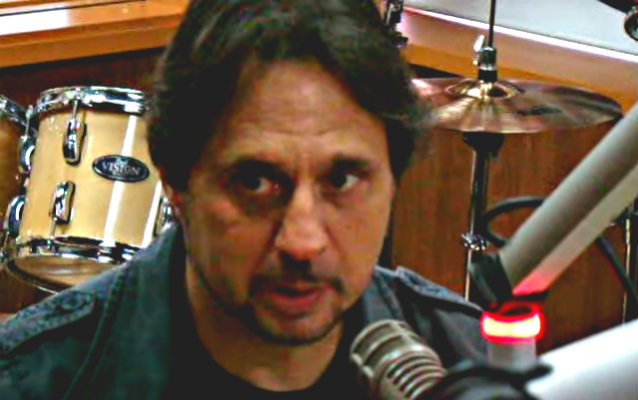 Earlier this month, former SLAYER and current PHILM drummer Dave Lombardo was interviewed on the São Paulo, Brazil radio station Kiss FM. You can now watch the chat below.

Asked about his very aggressive playing style, Lombardo said: "Yes, it's very physical, but it's so natural for me, because I've been doing it since I was 17 years old. So playing that style and playing with that energy, it's natural. I have to do it. I have to do it, not on a daily basis, but in my life. I have to play fast, because my body asks for it. I'm so used to it, I can't go without it."

Lombardo also spoke about the tendency by the newer artists to rely on the latest modern technology in the recording studio to produce sonic perfection.

"Well, I don't wanna sound like somebody that doesn't embrace new technology — which I do; I love the new technology — but you can abuse this technology and use it to… If it's something you wanna to make it better, sometimes it's not a good thing to use too much," he said. "So I like it, but only when it's used in its minimal form."

He continued: "I recently recorded with my new band [PHILM] on tape, a two-inch tape. Just like [SLAYER] did. We recorded 'Reign In Blood', 'South Of Heaven', 'Seasons In The Abyss'… We recorded all the original SLAYER records, all those were recorded on tape…

"[People who make their playing sound perfect using modern recording technology] go on stage, and where's the drummer? That doesn't work well. You have to deliver live. Your performance has to be on point, like it is on the record."

Lombardo was effectively fired from SLAYER after sitting out the band's Australian tour in February/March 2013 due to a contract dispute with the other members of the group. Filling in for him was Jon Dette (TESTAMENT, ANTHRAX).

Lombardo told "Let There Be Talk" podcast about the musical chemistry of the original SLAYER lineup: "I appreciate the nucleus of the band. Like [John] Bonham. When Bonham was part of [LED] ZEPPELIN. When his son [Jason] took over, oh my God. C'mon. Really? I have respect for Jason and for what he's done, but when he put a double-bass pedal on a single bass drum, that just blew it for me. It's, like, 'Really, dude? Your dad was about single bass.'