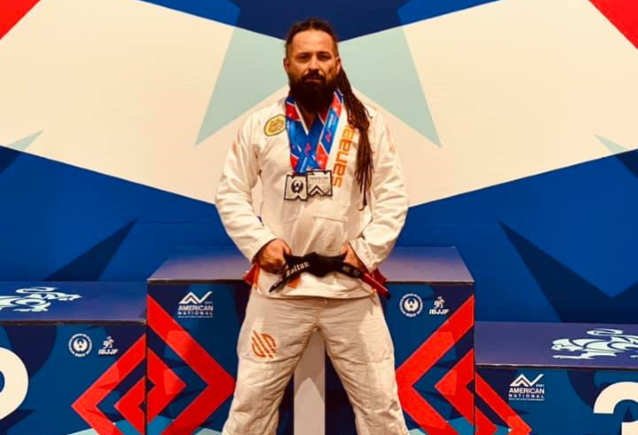 Bathory competed in the Master 5 division in both the super-heavy and absolute division, and came in second in both.

Bathory, who earned his Brazilian Jiu-Jitsu black belt back in March after 13 years of training, commented on his performance in a social media post earlier in the week. He wrote: " American National Jiu Jitsu Championship [ International Brazilian Jiu-Jitsu Federation] - Got Second Place in the Superheavy Division - and Second Place in the Absolute Division (which was absolute war) - I love my extended family - this Jiu-Jitsu community where we can fight scorched earth full force - and then after the fight we are back to being best friends... #respect #honor - I had a great time (my broken toe not so much) - thanks everyone I shared the mat with. - and my team Gracie Humaita Las Vegas Team Mica - Mica Cipili".

According to Jiu-Jitsu Times, Zoltan previously earned silver at the Abu Dhabi Pro Jiu-Jitsu World Trials in 2011 when he was a white belt, and he took home bronze in the Master 3 division at the 2012 World Masters Championship when he was a blue belt.

Zoltan began his jiu-jitsu journey in 2008 after a training session with the legendary UFC Hall Of Famer Royce Gracie.

"I've been practicing judo since I was nine years old, but I was always interested in jiu-jitsu as i knew about the Gracie family's open challenge (which later became the UFC)," Zoltan said. "Famous martial artists would travel to Brazil to fight them and the Gracies remained undefeated decade after decade. Many years later as an adult I finally had an opportunity to go to the source and train with probably the most recognized martial artist of all time next to Bruce Lee, the legendary Royce Gracie. After the session I asked him for a white belt and then began my jiu-jitsu journey. For a while, I would travel around the world with Royce's brother Royler Gracie who is one of the most decorated Brazilian jiu-jitsu fighters of all time. I'd partake in his seminars everywhere he'd go. Later I joined Professor Mica Cipili's Gracie Las Vegas team which I've called home for the last 12 years."

About keeping up with the training regimen despite his busy schedule, Zoltan said: "All of our security guys are jiu-jitsu black belts. It's a requirement for the position so I can train while we are on the road. When I'm home, I train at the Gracie Jiu-Jitsu academies in Las Vegas, and I also have a personal dojo in my house."

I received so many requests for videos and questions about the International Brazilian Jiu-Jitsu Federation Jiu-Jitsu Nationals... So here is the scrub-through of my fight in the Semi-Finals with a true heavy weight warrior Gilberto Monroy ? ??- (I narrated it with explanations of what’s happening even slowed down some parts so you guys can see it) - - - Sometimes it looks like just a tug of war - but once slowed down you can see there is a LOT going the untrained eyes would not even notice - Remember - These are Jiu-Jitsu black belt matches - highly skilled technicians facing off, where even twitch muscle level small missteps are costly, a few degrees difference in an angle, the speed of weight transfer from one leg to the other, the type of grip you attain can win or lose the fight. Here, you are watching two well trained 200+ pounders ?? locking horns with a life time of marital training behind them... Nobody is “getting their ass kicked” at this level, we are all looking to find and tread a needle size hole in each other’s games while our entire body Is pushed to the limits of its cardiovascular capacity ✊
samurai vs samurai - tested... #lovethis #jiujitsu #jiujitsu4life #jiujitsulifestyle #ibjjf #graciejiujitsu