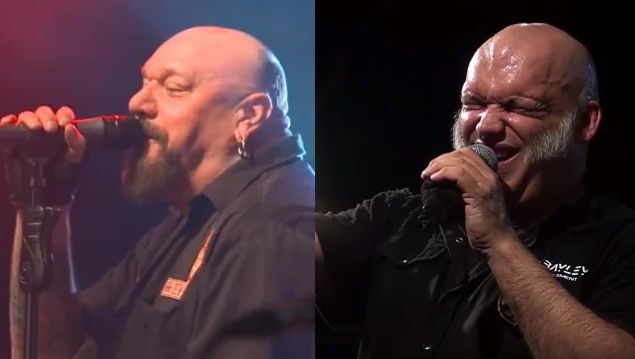 Former IRON MAIDEN members Paul Di'Anno and Blaze Bayley, along with the creator of the MAIDEN mascot "Eddie," Derek Riggs, will be inducted into the Metal Hall Of Fame.

Di'Anno wrote and sang on MAIDEN's first two legendary albums. They are still considered by many IRON MAIDEN fans to be their favorites.

Bayley was hired following the departure of vocalist Bruce Dickinson in the 1990s. Bayley wrote and sang for IRON MAIDEN for five years and recorded two albums with the band. Blaze-era songs are still concert staples in the band's setlist today.

Riggs is the genius behind the visual side of IRON MAIDEN. He created the iconic Eddie character, one of the most beloved mascots in history. Many can argue that a huge part of the band's continuous global success is attributed to the sinister, gruesome, shape-shifting Eddie.

"We are excited to induct these three artists who have helped shape the legacy of IRON MAIDEN," says Pat Gesualdo, Metal Hall Of Fame president/CEO.

Due to the current health advisory, the 2021 Metal Hall of Fame induction ceremony will be held online at a date to be announced.

The Metal Hall Of Fame is dedicated to forever enshrining the iconic musicians and music industry executives responsible for making hard rock and heavy metal music what it is today. Their contribution to the genre is invaluable, and they continue to inspire fans throughout the world, from generation to generation.

The Metal Hall Of Fame is part of the 501(c)(3) non-profit organization D.A.D. (Drums And Disabilities). D.A.D. provides free therapy and advocacy services for special needs children and wounded veterans in health facilities, schools, and community centers in over 15 countries.

As previously reported, IRON MAIDEN has been nominated for the Rock And Roll Hall Of Fame's class of 2021. The top vote-getters will be announced in May and inducted in a Cleveland, Ohio, ceremony in the fall.

According to the Rock And Roll Hall Of Fame, the IRON MAIDEN members that would get inducted include the current lineup of singer Bruce Dickinson, bassist Steve Harris, drummer Nicko McBrain, and guitarists Adrian Smith, Dave Murray and Janick Gers, along with former guitarist Dennis Stratton, Di'Anno and former drummer Clive Burr.