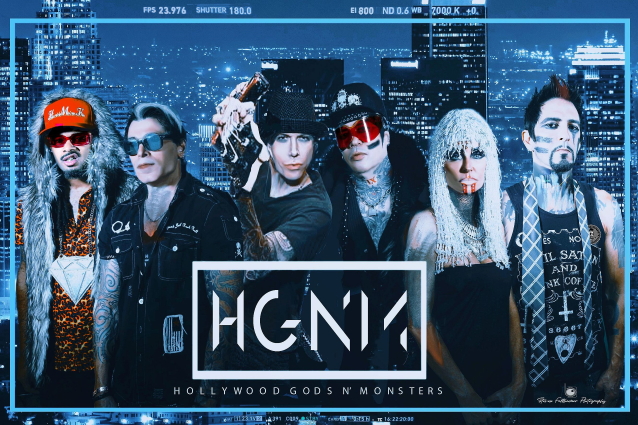 After performing for over two decades with his former band, Haley had amicably decided to move on and do something a little different in the space of music and bass playing alike.

Diggity Dave explains: "It's not like he ever thought he wasn't challenged by the copious amount of talent that resided within STEEL PANTHER; it's just that he wanted to explore different kinds of music and was intrigued by some of the music I was sending him."

Diggity Dave has been doing television since the early 2000s but came from the world of music. Diggity was signed to Warner Brothers Records in the mid-1990s with a band he fronted named SHAKE THE FAITH which featured Tommy Thayer (KISS) on guitar, Brian Jennings on guitar (who went on to play with TVT recording artists CLOSURE) and drummer Danny Parker (who went on to co-found Warner Brothers recording artist BEAUTIFUL CREATURES). After a decade of being on MTV, Diggity went on to star in countless other TV shows, including "Battleground Earth" with longtime friend Tommy Lee (MÖTLEY CRÜE) and famed rapper Ludacris.

Travis, Diggity, Brian, Danny and their female singer 7even (Kris Aragon) have known one another for 20 years before collaborating on this magnipotent, musical, mishmash.

Travis says: "I am very proud of what I've accomplished with my other band. Nothing can take away the memories and the camaraderie that existed for all those years, but I just felt it was time for something new. When I heard this music, I knew this was the group of friends and the music I wanted to collaborate on."

Because Diggity, Brian and Danny had all played in a previous band together and had been best of friends with Haley for more than half their lives, the opportunity to form a new band was simply too compelling not to do so. Diggity confesses that the challenge was what kind of music they would construct. "Once we figured it out, we then set out to find the missing pieces that would propel the sonic and sound needed to round out this parade of hooligans," he says. "We knew we were in need of two types of talent. A rapper extraordinaire that could dismantle any genre of music and reconstruct it into his own image, and a female singer that could terrorize through the throat but tingle the testicles. We managed to find the perfect purveyors of punched out panic."

HOLLYWOOD GODS N' MONSTERS has enlisted a rapper named Hype (a.k.a. H.M.K.) who is a phenom in the world of not just rap but also as a vocalist. Hype, who just released a single titled "Money & Power", was already a bullet on the rise in the musical scene when he was brought into the fold with HGNM. Hype says: "I knew this was a great opportunity to represent legends past and present from all genres of music, while also transforming music for a new generation. It was a no-brainer to team up with these rockstars and 'Define My Hype' to the world."

Rounding it out was a female singer who goes by the name 7even (also known as Kris Aragon). Travis says 7even was vital for the overall sound of the band because the music demanded not just a female presence, but a female who could occupy a musical space that was jumping from pop, punk, rock, rap, and country.

HOLLYWOOD GODS N' MONSTERS' music is what some might call "mashup" but they get agitated when people throw them in that category. HGNM is a new hybrid of musical forms, one that has not been explored, but is sure to ignite a million copy bands once they "blow up the area" and introduce the world to "smashup" music. The band explains it as a blender of styles, sounds, artists, genres, and attitudes.

Travis says: "This generation, the one before it, and the one that's following are ripe for a band like us. It's about losing yourself in the music, about dancing, about feeling alive. That's why the DJ scene has conquered music — because people wanna go to a show and identify and recognize the songs they're ingesting. They just wanna be enveloped in the music they know, their friends know, and hell… even their parents know."

Diggity closes by saying: "We are not a cover band. This is original stuff we're creating, and it's a living, breathing history of music. We equate it to what DJs are doing, but in the form of a full band smashing together the songs every generation has grown up with. What other band is mixing the '70s band CHIC with QUEEN, AEROSMITH, SUGARHILL GANG, BLONDIE and DMX? And that's just one song by us. Also, kids wanna see rock stars again… larger-than-life entities on stage that mirror the atmosphere. Think of us as a bigass American jukebox… where all the records in it have melted together… except when you press B5…you get that plus B6, B7, B8 and the track you thought you knew is now a stitched-up Frankenstein jam that makes you shake your ass harder than ever."